Nov. 28 is the last day Arkansans can submit their feedback on new election boundaries for state senators and representatives.

The date marks 30 days from when the Arkansas Board of Apportionment released proposed maps for the 135 legislative districts.

"As the communities look at these maps you are going to say well I wish it could have been a little bit different," Gov. Asa Hutchinson said at the meeting introducing the maps. "Well just remember whatever change that would be made to accommodate that would impact have a ripple effect across the state. So that usually is the reason that we could not do it just perfectly for one community because we have to look at the entire state and the populations shifts."

The new maps are part of the redistricting process that takes place every decade across the country after the federal census. Arkansas’ population grew by 95,000 people over the past decade - officially topping 3 million people for the first time.

The maps determine what election districts people live in for the next decade and who is eligible to run for the legislative seats. A lot of attention is placed on the maps and the process used to create them because of concerns about equal representation. Read more about redistricting.

Where Can I Find The Maps? 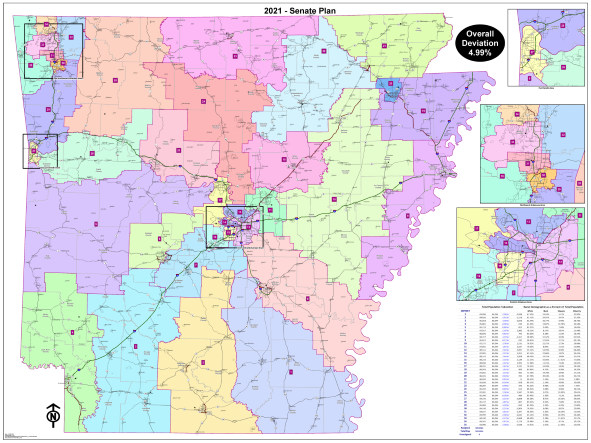 PDFs of the House and Senate maps are posted on the Board of Apportionment website. Interactive maps were released today that allow people to search by address to find what district they would now live in under the proposed maps.

The Board of Apportionment – which consists of the governor, secretary of state and attorney general – expects to meet again on Nov. 29.

Hutchinson said he anticipates voting at that meeting to officially approve the maps unless there are changes made based on public feedback. Afterward, state law calls for a 30-day period for possible legal challenges to be filed.

If no legal challenges are filed, the maps would take effect Dec. 30, setting boundaries for potential officeholders starting in the 2022 election cycle.

(Looking Back: After the 2011 cycle, a state senator and several other residents sued the Board of Apportionment over the new maps over concerns of racial discrimination. A federal court dismissed the lawsuit.)

Anyone can submit their 700 characters of feedback on the proposed maps on the Board of Apportionment website at https://arkansasredistricting.org/public-comments/public-comment/.

The comments are public record and also appear on the website along with the writer's name, city and county.

Alternatively, it appears public comment can also be submitted on the interactive maps.

Former state Supreme Court Chief Justice Betty Dickey talked about the nine criteria they used to create the maps after hosting eight public meetings across the state to explain the redistricting process. Dickey was hired by the Board of Apportionment to coordinate the public process.

Dickey said redistricting criteria was based on federal and state laws, the Arkansas Constitution, and the National Conference of State Legislatures' redistricting law handbook. For example, Dickey mentioned their goal was to avoid splitting counties as much as possible, though she recognized that wasn't always possible.

What about U.S. House of Representative District maps?

Legislators approved those maps last month. A ballot issue group has filed paperwork to seek a referendum on the maps, and has until mid-January to submit voter signatures to qualify the issue for the November 2022 ballot.