Some may remember the 2017 solar eclipse that traveled over northern Arkansas at 80% coverage of the sun. About a month leading to the date, store owners found themselves trying in vain to restock shelves with more welding and sun protective glasses as shelves were emptying when people realized the eclipse was approaching.

Arkansas was not in the path of totality, but it was still quite a sight for those that were able to observe it on Aug. 21, 2017. It certainly was eventful for the middle school children who still recall watching the moon travel over the sun as they wore specially designed glasses allowing them to watch directly into the sky. Vehicles stopped on four-lane highways as drivers exited their vehicles to watch along side residents that took a pause to witness the eclipse. People were fascinated at the view before them. 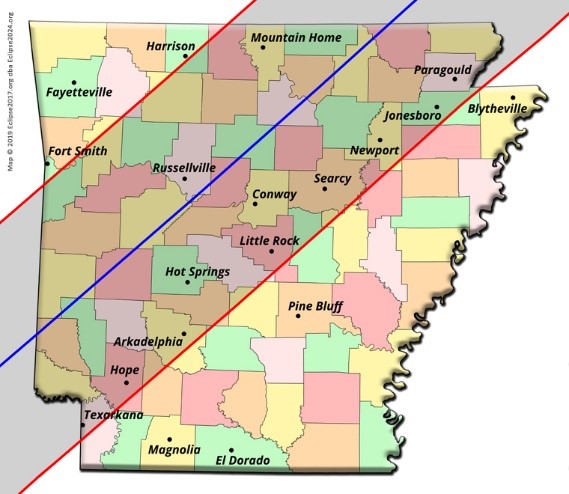 So, to learn that two-thirds of Arkansas will be in the path of the 2024 North American Solar Eclipse in totality is, of course, a reason to get excited. Not expected to be visible again in North America until 2045, this full total eclipse event could be equated to a bowl championship event for Arkansas rural communities.

The path of the total eclipse will be 120 miles across with the centerline of the path expected to experience of the totality of the moon over the sun for the duration of four minutes and twenty-six seconds, more than double the length in 2017.

Now, with 30 months to the Great North American Solar Eclipse on April 8, 2024, rural communities in Arkansas have a chance to prepare, attract, and share in the tourism draw that will attract thousands of people to Arkansas with the potential for record revenue and sales tax for many regions. With low sky pollution and vast viewing areas, rural Arkansas can capitalize on what could be one of the largest tourism events these communities will experience.

To help start the process, CREATE BRIDGES, in association with Arkansas Tourism, brought to light the experience of the town of Casper, Wyoming, during the 2017 eclipse.

Brook Kaufman from Visit Casper, the Natrona County Travel and Tourism Council in Wyoming, visited Arkansas in October to share her community's experience preparing for the 2017 eclipse and hosting a five-day Wyoming Eclipse festival. 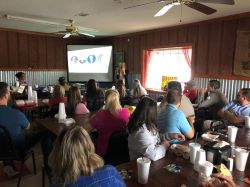 Brook Kaufman speaks to the Ashdown community at Big Jakes about preparing for tourism associated with solar eclipses.

More than 155 attendees from the Ozark Foothills (Sharp, Fulton and Izard counties) and the 3Cs (Sevier, Howard, and Little River counties) regions, in addition to Little Rock and Hot Springs, heard Kaufman provide insight, encouragement, and a dose of reality of what the eclipse can mean to the state and individual communities. These presentations generated immediate interest, attracting over 1,700 streaming social media views of Kaufman’s DeQueen public meeting, presumably from other rural communities reaching out to learn more about the presentation and how to work together as a region as Kaufman suggested.

With over two years to prepare - just like a championship bowl series - there is plenty of time to make investments that will benefit many Arkansas rural communities during the eclipse and for years to follow. Or, in truth, they can choose to do nothing and just enjoy the eclipse as it happens. But people will come, whether communities prepare or not. So, why not make it a revenue win for rural Arkansas?

You can watch the presentation on Ed 88 Facebook page.

To learn more about how Arkansas Tourism is preparing for the Great American Eclipse, you can visit their website: https://www.arkansas.com/things-to-do/outdoors/skygazing/2024-eclipse.

Create Bridges aims to strengthen economies in rural Arkansas by building capacity in retail, tourism, accommodations, and entertainment sectors. The initiative was launched in 2018 to promote and strengthen these industries within the Ozark Foothills (Sharp, Izard and Fulton counties) and 3Cs (Howard, Little River and Sevier counties) regions of Arkansas.