LITTLE ROCK — In November’s upcoming General Election, Arkansas voters will have four proposed constitutional amendments on the ballot. To help Arkansans understand these proposed changes to the state constitution, the University of Arkansas System Division of Agriculture’s Public Policy Center has published an online guide to Arkansas’ statewide ballot issues. 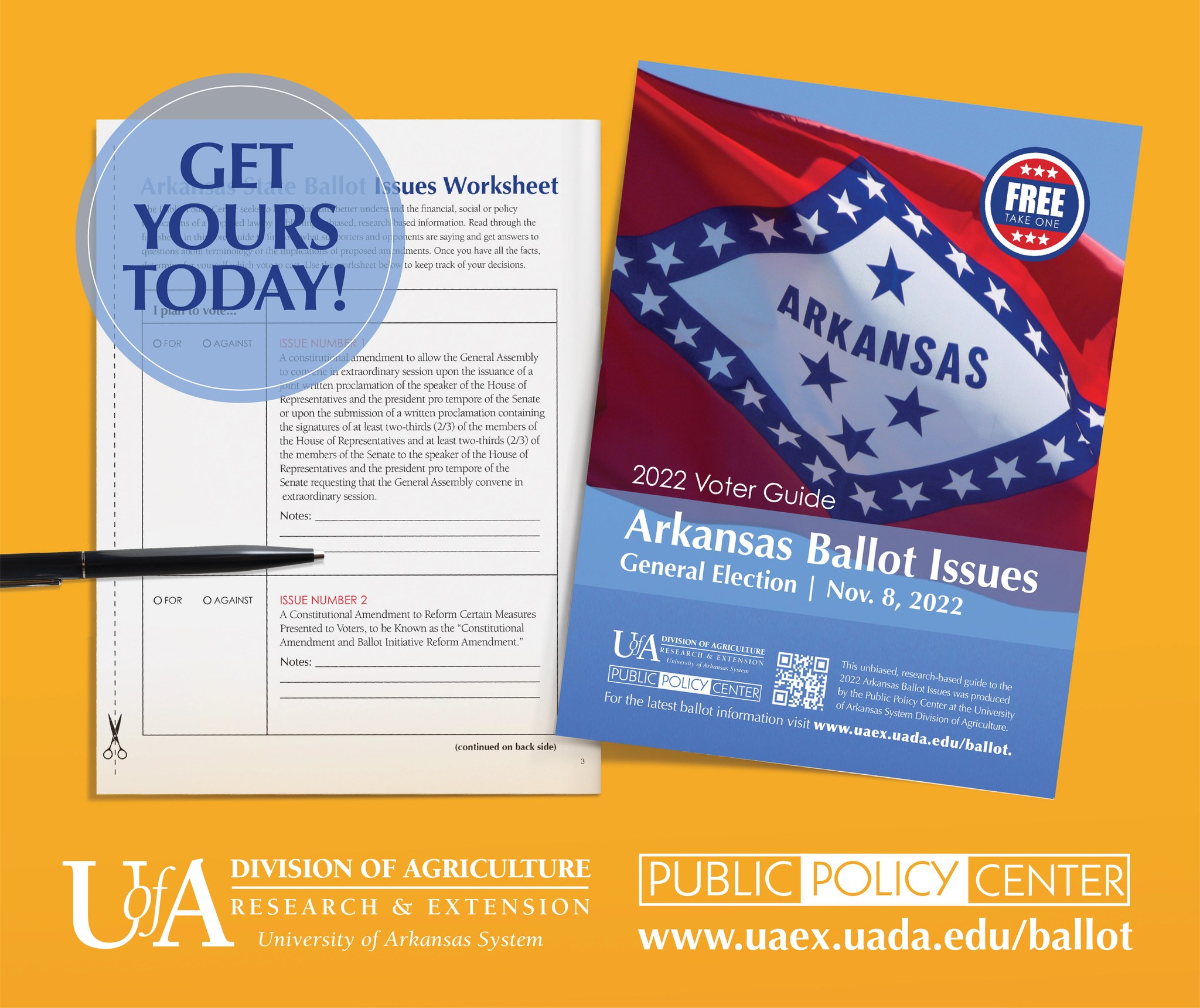 The Public Policy Center is a part of the Division of Agriculture’s Cooperative Extension Service. The 2022 Arkansas Ballot Issue Voter Guide was released Sept. 12 and is available at uaex.uada.edu/ballot. Printed copies will be available in county extension offices statewide in early October.

The Ballot Issue Voter Guide is a neutral, research-based resource that shows how proposals will appear on the ballot, answers basic questions about each issue, and includes reasons why people may support or oppose each proposed amendment.

Kristin Higgins, extension program associate for the Public Policy Center, said the voter guide is designed to help Arkansans be informed voters about the policy issues that impact them. It breaks down each issue to “spell out what it does,” and what a “for” vote means and what an “against” vote means.

“The ultimate goal is to increase voter participation and to help people feel confident in their vote,” Higgins said. “The voter guide is a tool to bypass misinformation and have a neutral presentation of the facts.”

The voter guide is reviewed by University of Arkansas School of Law professors, subject experts, and both supporters and opponents of the issues. Higgins said the guide provides voters with important context about the issues – context that is opinion-free.

“We answer basic questions to provide voters context: when was the last time this issue was voted on, what are other states doing, and often times, how did we get here?” Higgins said. “If you search the internet for information about ballot issues, you’ll come across opinionated websites lobbying for your vote. We don’t do that. Our goal is to give voters the information they need to make a decision on important state policy issues.”

Higgins said the Public Policy Center’s voter guide is the only one that packages all the ballot issues together – so voters can see them all at once – and it shares what supporters and opponents say about each issue. The Center’s website offers even more information about each proposed amendment, including links to groups that have filed their support or opposition to an issue with the Arkansas Ethics Commission.

Issue 4 is currently under review by the Arkansas Supreme Court. Higgins said sponsors of the issue have collected the required number of voter signatures for the measure to qualify for the ballot, but they “had to go to court after state election commissioners declined to sign off on the ballot title.”

“Election commissioners said the title would mislead voters by not describing all of the changes proposed in the amendment,” Higgins said.

As of this publishing, Arkansas voters will have a say on whether a certain amount of marijuana can be legally grown, sold and possessed in Arkansas without fear of arrest under state law.