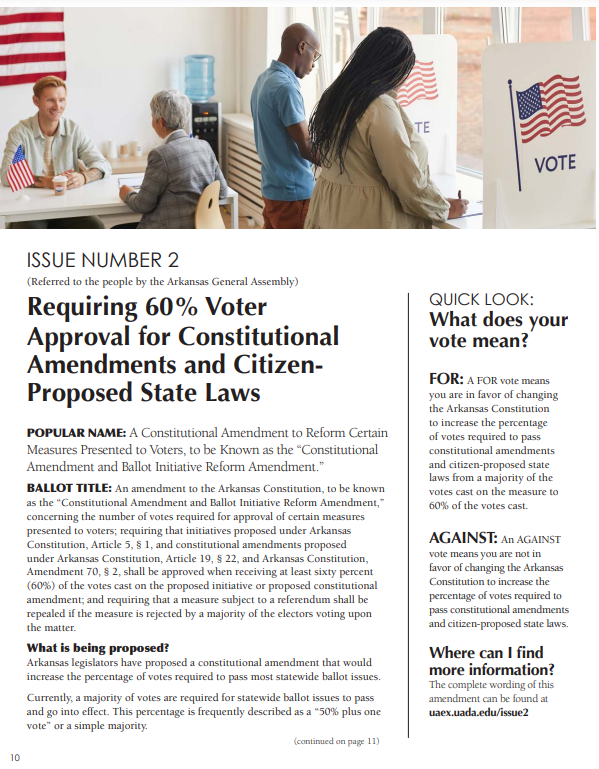 PRINT ISSUE 2 of 2022 Fact Sheet-- Get the facts about what this constitutional amendment would do, what supporters and opponents say, and a sneak peek at the ballot title you will see on Election Day.

Issue 2 was one of four constitutional amendments on the Nov. 8, 2022 ballot.

The Public Policy Center has provided neutral information on statewide ballot issues since 2004. Download the full 2022 Arkansas Ballot Issue Voter Guide or click on the image to access a printer friendly version of our Issue 2 fact sheet. The information below is from our voter guide.

Arkansas senators and representatives voted to place HJR1005, as Issue 2 was known then, on the 2022 General Election Ballot. The Arkansas Constitution grants the legislature the right to include up to three constitutional amendments on the general election ballot.

Constitutional amendments currently require the approval of a majority of voters in a statewide election. Election Day is Nov. 8, 2022.

A FOR vote means you are in favor of changing the Arkansas Constitution to increase the percentage of votes required to pass constitutional amendments and new state laws from a majority of the votes cast on the measure to 60% of the votes cast.

An AGAINST vote means you are not in favor of changing the Arkansas Constitution.

On Election Day, the ballot will show only the popular name and ballot title of this issue.

Every proposal has more text to it that further describes the proposed law. Read the complete text of Issue 2, or HJR1005 as it was previously known, on the legislature's website.

Arkansas legislators have proposed a constitutional amendment that would increase the percentage of votes required to pass most statewide ballot issues.

Currently, a majority of votes are required for statewide ballot issues to pass and go into effect. This percentage is frequently described as “50% plus one vote” or a simple majority.

Issue 2 proposes amending the three sections of the Arkansas Constitution governing ballot issues to require a “super majority” vote in order for constitutional amendments and initiatives to go into effect. Specifically, Issue 2 proposes:

Requirements for citizen-sponsored referendums, which ask voters to decide the fate of existing laws, would remain unchanged and be decided by a simple majority of voters.

Changing the Arkansas Constitution requires a vote of the people. The state constitution dates back to 1874 and there are currently 102 amendments to the original document. Arkansas voters rejected several attempts in the last century to pass a newer state constitution, leaving the amendment process as the only way to make changes or updates.

Additionally, the ballot issue process is the only way for citizens to directly propose changes to state law to be decided by a vote of the people rather than relying on legislators to consider and decide on these changes.

There are two routes: a legislature-led process and a citizen-led process.

Legislative process: Lawmakers submit proposals for constitutional amendments when they meet as the General Assembly in odd-numbered years. Committees in the House and Senate review the proposals to determine which ones should be voted on by all legislators.

The legislature can refer up to three constitutional amendments to voters, in addition to a proposal related to their salary. Placing these issues on the ballot requires approval by 50% of the legislature; This equals approval from 18 of the 35 senators and 51 of the 100 representatives.

Citizen initiative process: Arkansans can propose a constitutional amendment, a state law, and a referendum on whether to keep or repeal newly adopted laws from the legislative session.

The number of voter signatures required to qualify a proposal for the statewide ballot varies depending on the type of ballot issue.

Only after this criteria is met are citizen-led issues placed on the ballot for voters to decide.

Between 2000 and 2020, Arkansas voters considered 40 proposed constitutional amendments and state laws that had been referred by the legislature and citizen groups. Voters approved 30 of these ballot issues and rejected the remaining 10 proposals.

Of the 30 measures voters passed, 18 received at least 60% voter approval.

This means that 12 of the 30 proposals that Arkansas voters passed in the last 20 years would not have satisfied the proposed 60% voter approval requirement.

Find out how past ballot issues faired individually with voters at www.sos.arkansas.gov/uploads/elections/Initiatives_and_Amendments_1938-2020.pdf.

Every state has a process for ballot issues, but what is allowed and the requirements for passing such measures vary dramatically.

Looking at the country overall, these are the states that require a super majority vote for a ballot measure to pass:

Arkansas is one of 15 states where in addition a legislative amendment, citizens can ask voters to consider constitutional amendments, state laws and referendums.

Of these 14 other states:

View our state-by-state analysis at www.uaex.uada.edu/business-communities/voter-education/docs/Ballot%20Access%20Requirements%20by%20State%20-%20Sept.%202021.pdf

If approved, the changes listed in this proposal would take effect Jan. 1, 2023 for the next statewide election in 2024.

What Do Supporters and Opponents Say?

The following statements are examples of what supporters and opponents have made public either in media statements, campaign literature, on websites or in interviews with Public Policy Center staff. The University of Arkansas System Division of Agriculture does not endorse or validate these statements.

Public Policy Center staff summarize Issue 2 on the Arkansas ballot in the video below.

Filings with the Arkansas Ethics Commission

Groups that support or oppose ballot issues are required to register with the Arkansas Ethics Commission as a ballot or legislative question committee once they raise or spend a certain amount of money on their efforts.  Visit the Commission's website to view these filings, which include names of people behind a group and how much money has been raised or spent.