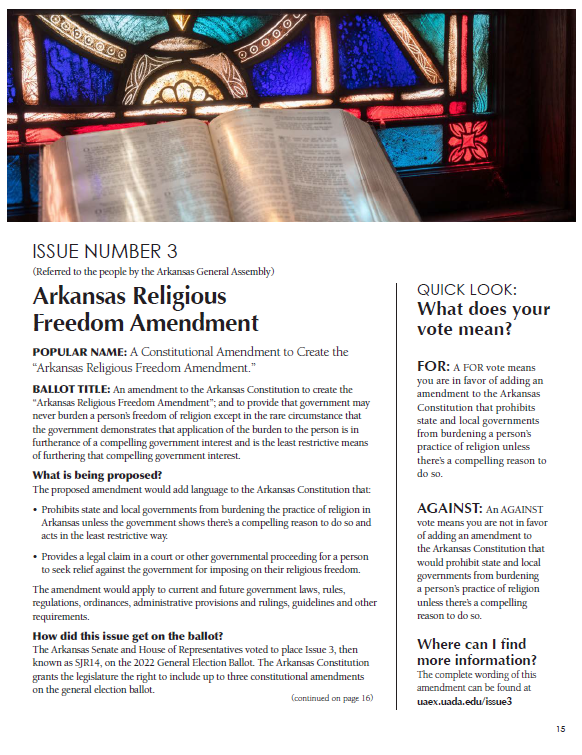 ISSUE 3 of 2022 -- Get the facts about what this constitutional amendment would do, what supporters and opponents say, and a sneak peek at the ballot title you will see on Election Day.

How did we do? Take our survey!

Arkansas voters will decide in November 2022 whether to amend the Arkansas Constitution. Issue 3 is one of four constitutional amendments on the 2022 ballot for voters to decide.

The Public Policy Center has provided neutral information on statewide ballot issues since 2004. Download the full 2022 Arkansas Ballot Issue Voter Guide or click on the image to access a printer friendly version of our Issue 3 fact sheet. The information below is from our voter guide.

A Constitutional Amendment to Create the “Arkansas Religious Freedom Amendment.”

Arkansas senators and representatives voted to place SJR14, as Issue 3 was known then, on the 2022 General Election Ballot. The Arkansas Constitution grants the legislature the right to include up to three constitutional amendments on the general election ballot.

Constitutional amendments currently require the approval of a majority of voters in a statewide election. Election Day is Nov. 8, 2022.

A FOR vote means you are in favor of adding an amendment to the Arkansas Constitution that prohibits state and local governments from burdening the practice of religion unless there’s a compelling reason to do so.

An AGAINST vote means you are not in favor of adding an amendment to the Arkansas Constitution that would prohibit state and local governments from burdening the practice of religion unless there’s a compelling reason to do so.

On Election Day, the ballot will show only the popular name and ballot title of this issue.

Every proposal has more text to it that further describes the proposed law. Read the complete text of Issue 3, or SJR14 as it was previously known, on the legislature's website.

The proposed amendment would add language to the Arkansas Constitution that:

The amendment would apply to current and future government laws, rules, regulations, ordinances, administrative provisions and rulings, guidelines and other requirements.

Approved by voters in 1874, the Arkansas Constitution contains a freedom of religion provision in Article II, Section 24:

All men have a natural and indefeasible right to worship Almighty God according to the dictates of their own consciences; no man can, of right, be compelled to attend, erect or support any place of worship; or to maintain ministry against his consent. No human authority can, in any case or manner whatsoever, control or interfere with the right of conscience; and no preference shall ever be given, by law, to any religious establishment, denomination or mode of worship above any other.

Since then Arkansans have not voted on any constitutional amendments regarding this issue.

Government is defined in the proposal as:

The amendment would apply to local, county and state government agencies, courts, state-funded schools and colleges, government-owned utilities, and government-related commissions, councils, and boards. If an entity was created by an Arkansas governing body or law, it would fall under the definition of government in this proposal.

There are federal and Arkansas laws regarding the free exercise of religion.

In 1993, Congress passed the Religious Freedom Restoration Act (RFRA) in response to a 1990 U.S. Supreme Court case that affected how to judge and determine the government’s burden in constitutional free exercise claims. The RFRA prohibited federal, state and local governments from “substantially” burdening a person’s exercise of religion.

In 1997, the U.S. Supreme Court ruled that the RFRA was unconstitutional as it applied to state and local governments because it exceeded Congress’ enforcement power. However, RFRA is still the law when it comes to the federal government’s impact on a person’s exercise of religion.

Since then, Arkansas and more than 20 other states have passed their own versions of the federal law.

The state law refers to a federal test, or method, for determining whether a government has a compelling interest for substantially burdening the free exercise of religion.

There is not a definition of “burden” in the proposed amendment or a process for identifying when a government does it for non-compelling reasons. This will likely be left for court interpretation.

The term “compelling government interest” isn’t defined in this proposal, but the Arkansas General Assembly’s legislative findings that accompanied Issue 3 when they voted to place it on the ballot note that the “compelling interest test” described in previous court rulings as well as in the federal law “is a workable test for striking sensible balances between religious liberty and competing government interests from public education … [to] national defense … and other areas of important mutual concern.”

There is no definition of “person” in the proposed amendment. (Nor is there a definition in Act 975, a current law discussed above.)

Ultimately, a court would resolve what this term means, which could stretch beyond the common use of “person” to refer to a human being. For example, the U.S. Supreme Court ruled in Burwell v. Hobby Lobby that “person” included privately-held corporations.

A provision for freedom of religion is found in all 50 state constitutions, according to a reference guide on the Arkansas Constitution by Kay Goss.3 Additionally, religious freedom restoration laws now exist in over 20 states, including Arkansas and states surrounding us.

According to the National Conference of State Legislatures, some states define “burden” and “person” in their state laws. In addition to prohibiting government interference, Indiana and Texas also prohibit non-governmental entities from burdening religious practice.

Only Alabama has a constitutional amendment. Alabama’s amendment does not include the word “substantially” when discussing burden. Arkansas lawmakers said they modeled Issue 3 after the Alabama amendment, which voters there approved in 1998.

What Do Supporters and Opponents Say?

The following statements are examples of what supporters and opponents have made public either in media statements, campaign literature, on websites or in interviews with Public Policy Center staff. The University of Arkansas System Division of Agriculture does not endorse or validate these statements.

Filings with the Arkansas Ethics Commission

Groups that support or oppose ballot issues are required to register with the Arkansas Ethics Commission as a ballot or legislative question committee once they raise or spend a certain amount of money on their efforts.  Visit the Commission's website to view these filings, which include names of people behind a group and how much money has been raised or spent.