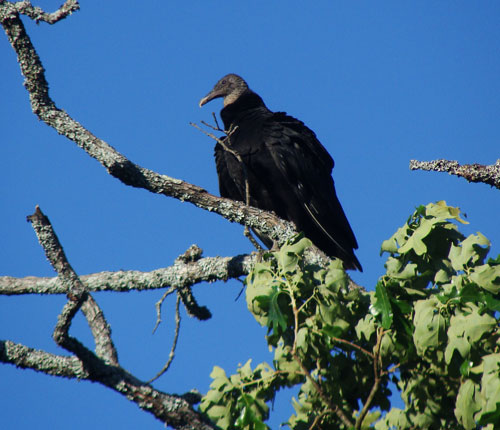 On a walk around the Lincoln Lake trail earlier in the week I was taken back to a question I considered in my youth as I circled the prairie hay meadows, mowing down swaths of grass.  Were I to come back as a bird, would I rather be a red-tailed hawk or a buzzard?  Tractor driving provides lots of time to ponder such weighty questions.  At that time eagles were not seen in our area, so I never really decided which afterlife I would choose.

Walking the trail, I heard a rustling in the trees next to the edge of the lake and was surprised to see maybe 30 or so black vultures sitting shoulder to shoulder on the branches of a sycamore.  One would fly in, nudge the others for room, and one or two would fly off.  They seemed to have no trouble navigating through the bare branches of the woods in spite of their five-foot wingspan. Resuming my walk, I came to the sandstone promontory that overlooks both arms of this small lake where I sat on a rock to enjoy the view.

Glancing skyward I discovered I was being circled by an enormous kettle of vultures.

When circling effortlessly on a thermal, vulture flights are called “kettles” but when perched in a tree they become a “committee.”  When they move to the ground to devour roadkill, the congregation becomes a “wake.”  The kettle circling my position, probably because the exposed sandstone fueled the thermal, must have contained at least 100 birds.  Off to my right was a second kettle with an equal number of birds.  Just to be safe, I waved my arms a bit as I laid back on the rock to watch them soar.

As a kid I called these flying scavengers “buzzards” because, at least as I remember, that was what the cowboys called them in those old black and white westerns. Correctly they should be called vultures, but even James Audubon got this one wrong.  He called the birds I saw “black vultures” or “carrion crows” but the turkey vulture, with its ugly, wrinkled red head, he called a “turkey buzzard.”

As it turns out, true buzzards are a kind of European hawk, so using that name for the two species of vultures found in North America only confuses things.

The black vulture is a widely distributed bird, ranging along the southern states and as far north along the Atlantic as New Jersey and as far south in South America as central Chile. The current range map for this species shows the Ozarks as about as far north as these birds occur but Audubon says he encountered them as far north as Ohio. I don’t know if this massive congregation of birds was because they perceived the weather change that is now upon us or if they just found the woodlands around Lincoln Lake to their liking.

So many birds in one place makes me wonder.  How do you feed several hundred five-pound birds on roadkill?  It turns out they are pretty aggressive and ranchers report they will attack and kill newborn calves, and even cows, while birthing. Audubon says that in his day (the 1820s and 30s), black vultures were pretty brazen city dwellers, especially liking open garbage dumps and slaughter houses where offal was readily available.

Audubon relates how the birds were, unlike most birds, not especially fearful of human contact. 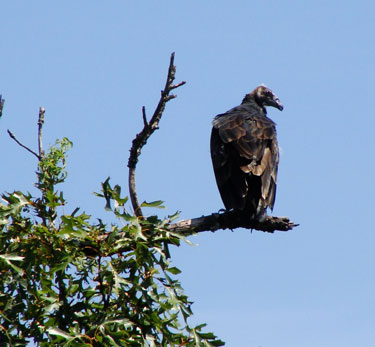 A friend told me a story of living in Louisiana during one of the bad flood years in the 1970s. The whole area flooded except for the little knoll on which their little homestead perched.  It became a refuge for all the animals that lived in the surrounding forest.

Each morning she would take her trusty .22 into the henhouse and shoot the snakes that moved in each night to do mischief. After a couple days of throwing dead snakes over the fence, the vultures would perch there completely unafraid, waiting for her to finish her chore.

While there is only limited, and mostly anecdotal, data on farm animal kills by black vultures, it does happen and the occurrence seems to be increasing.

Neil Compton, the late Arkansas physician and conservationist, said that the Christmas bird count from 50 years ago reported only occasional sightings of the black vulture in northwest Arkansas. But, as the deer population of the region rebounded in the 1990s, the number of black vulture sightings became more frequent.

With only a limited number of deer roadkills, the elimination of dead-animal dumps by farmers and rapid burial of trash at landfills, pickings became slim for these large birds. Because of their aggressive ways Arkansas has joined a pilot program to control farm-animal predation.

Even though the bird is federally protected, a total of up to five black vultures can be taken if the rancher obtains the appropriate permit.

These dead birds must be “posted” around the ranch as warnings for other would-be offenders. Audubon, who shot-gunned many birds while making his famous paintings, recounted that they quickly learned to recognize him and his horse and speedily departed for other parts when he arrived.

Learn more about black vulture control and how to get a permit.