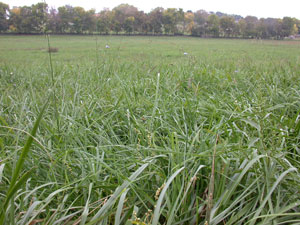 I thought an interesting part of this blog would be to highlight some of our commonly grown forage species here in the Ozarks. Discuss their history, how they grow, pro and cons, and so on.

Being in northern Arkansas, how could we not start with fescue? While there are somewhere around 150+ species of fescue, or plants belonging to that genus, the one we’re talking about is tall fescue, Lolium arundinaceae.

If there was ever a pasture plant that dominates our grazing lands landscape, it’s tall fescue. However, it hasn’t always been here. Tall fescue is a native of Europe and found its way here sometime in the late 1800s, we think. And, it wasn’t until the 1930s, when an agronomy professor from the University of Kentucky, Dr. Fergus, took some seed to do a little research work with it. After more than a decade of various tests and trials, ‘Kentucky 31’ tall fescue was unleashed in 1943. 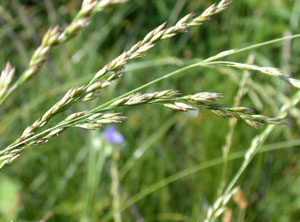 How did tall fescue become so widespread?

The reasons tall fescue caught on so well nearly 80 years ago are the same reasons we’re still growing it here today. Plain and simple: it’s tough. It’s a cool season grass that does most of its growing in the spring and fall, but as far as cool season grasses go, it’s got great tolerance to summer heat and drought.

It typically won’t grow much during that time, but it will hang in there and survive. It doesn’t have much in the way of insect pests or diseases that bother it, and it’ll grow in a variety of soil types…from rocky, dry hillsides to low-lying, wetter areas.

Fescue is widely grown in an area sometimes referred to as the Fescue Belt where on its southern edge, it covers northern AR, MS, AL, GA, and much of North and S. Carolina. On its northern edge, it’s found in most of Missouri, southern Illinois and Indiana, southern Ohio, West Virginia, Virginia, and everywhere in between.

A large part of the reason that it is so hardy and versatile is because of its relationship with a certain fungus, known as an endophyte – endophyte meaning “inside or internal fungus”.  That endophyte produces compounds that help provide resistance to some pests and give the plant its ability to handle environmental stress. So, in short, this relationship is what makes the plant so great.

Fescue Can Cause Problems for Grazing Animals 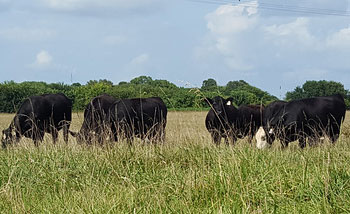 But, and there’s always a “but”, it’s also what makes it not so great. Those same compounds cause problems for grazing animals, like cattle. One particular compound, called ergovaline, wreaks a little havoc in cattle’s bodies.

Increased levels of the compound can a cause a restriction of small blood vessels, known as vasoconstriction. The problem becomes especially evident in the animal’s extremities, where those blood vessels are already small to begin with.

What signs should I look for in my animals?

Animals that aren’t well adapted to fescue will show signs of hoof problems, lost ears or tail switches. Also, this prevents animals from being able to cool themselves naturally, via their own blood flow, and that’s why we see animals with fescue toxicosis spending time in ponds…trying to cool off. Animals experiencing fescue toxicity will often have reduced feed intake, rougher coats, decreased weight gain in growing animals, and the list goes on.

How do I prevent fescue toxicity?

The good news is, it’s all manageable. Simply diluting their intake of toxic tall fescue makes a big difference regarding those health problems. Instead of grazing a field that 100% infected tall fescue, maybe look to incorporate more white clover and orchardgrass.

See our publication on forage clovers.

Through advances in plant breeding, we also now have cultivars of tall fescue that contain the endophyte, but don’t produce as much or any of those compounds, like ergovaline. These are known as “novel” endophyte fescue cultivars. Establishing and maintaining them economically and correctly is a process and probably better saved for a future blog post. We get to retain the toughness and versatility of fescue without the negative effects of the endophyte. You might also see “endophyte-free” cultivars, and while this might sound great, we don’t generally recommend using those. Being totally endophyte free means you lose the persistence that you get with having the endophyte present, and after a year or two, those plants don’t survive.

We have a ton of resources on fescue for pastures.

In future posts, we’ll hit on bermudagrass, orchardgrass, and the legume species that are typically found in Ozark pastures.

I’d be remiss not to mention the ire fescue draws from wildlife habitat advocates. It doesn’t have nearly the benefit that native bunchgrasses do, regarding nesting and cover areas, especially for quail and other birds. Fescue wants to bunch up initially, but after a while, it forms a fairly dense sod. Read more about tall fescue as a lawn grass.