Plant of the Week: Tall Fescue 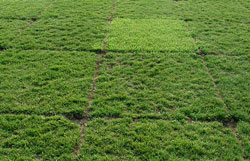 Each of these test plots represents a different selection of turf type tall fescue.

Lawns are a mainstay in American gardens in part because growing and mowing grass is a relatively easy way of maintaining a lot of ground. If the space around our homes was tiny, no doubt there would be fewer lawns. Turf experts talk about two kinds of grasses; the warm-season and the cool-season kinds. In the South, the warm-season grasses are often the default lawn, with a mixture of bermudagrass and crabgrass eventually taking over if no care is given. Of the cool-season lawn grasses, selections of tall fescue (Festuca arundinacea) are the most common.

Tall fescue is a native European grass that was introduced into the United States in the late 1800s. In 1931, E. N. Fergus at the University of Kentucky collected seeds of a tough, drought-resistant strain he found growing on a steep hillside in Menifee County, Ky. After more than a decade of testing and seed increase, he released the forage grass in 1943 as Kentucky 31 (also called K 31). Today, it is seen across the southeastern states, where it grows on more than 35 million acres. Tall fescue has been used as a lawngrass since the 1950s; today the South Lawn of the Whitehouse is the probably the most famous tall fescue lawn.

Tall fescue is a long-lived, clump-forming perennial grass producing broad, coarse leaves up to 18 inches tall that will persist throughout the year unless the summers are too dry, when it may go dormant. Cool-season grasses such as tall fescue resume vegetative growth in the fall and remain green over winter, though they only make wintertime growth when the soil temperature is above 40 degrees. In late spring, the clumps flower and send up a number of 3-foot-long flowering spikes, which produce the seeds.

The toughness of tall fescue - its drought tolerance, its ability to grow on acidic, poor quality wet soils and its resistance to pests - is due to a symbiotic association of the grass with an endophytic fungus. The fungus grows between the cells of the fescue and helps in nutrient absorption and warding off insect and disease attack. Unfortunately, the presence of this fungus can be deadly to horses and tends to reduce weight gain in cattle. Endophyte-free selections are now being offered for cattlemen while researchers attempt to identify endophyte strains that provide the positive effects but not the negative traits.

As a lawn grass, the presence of endophytes is of little concern and is probably beneficial. But the coarseness of K 31 has reduced its popularity with gardeners wanting a high-quality cool season lawn. In the 1980s, lawn type tall fescue selections became available. These typically have a leaf blade one-fourth as wide as the usual quarter-inch wide K 31 fescue leaf blade. The brands of lawn type fescue marketed are usually made up of blends of four to six separate cultivars that help ensure success when planting.

Cool-season fescue lawns are best planted in September and October, as this gives the plant more time to sink a root system before being faced with the heat of summer. February or March planting will also work, assuming the summer is not too hot or too dry. If the site is irrigated, tall fescue lawns can be seeded later in the year. Seeding rates are high for this grass, usually averaging from six to eight pounds of seed per 1,000 square feet. This dense seeding rate reduces the tendency for individual plants to clump. Unfortunately, the high seeding rate also leads to strong competition and the number of individual plants per square foot declines by about 50 percent every year. After four or five years, overseeding is usually needed to keep the lawn full and reduce clumping.

Tall fescue is often chosen as a lawn in areas where there is some shade. While this grass will grow in areas where bermudagrass will fail because of lack of light, it still needs as much light as possible. Tall fescue lawns should be mown at 2.5- to 3 inches high. This high cut keeps the turf dense and helps ensure deep root growth, which helps the lawn make it through periods of stress. Fertilization is done during the fall and spring for cool-season lawns and skipped during the summer months.