The virtual event was billed as one for “jail professionals, correctional professionals, public leaders, community leaders, experts, volunteers, citizens and more – with a focus on learning, growing, sharing, and supporting the local jail as we plan in terms of community engagement, programming, reentry, and support services.”

Speakers discussed how to address jail staffing challenges, grant opportunities, new mental health initiatives, and the impact of educational programs on people in jail or recently released. While many of these programs are educational, they are seen as re-entry programs that can help prevent people from coming back to jail.

Cooperative Extension Service As A Partner 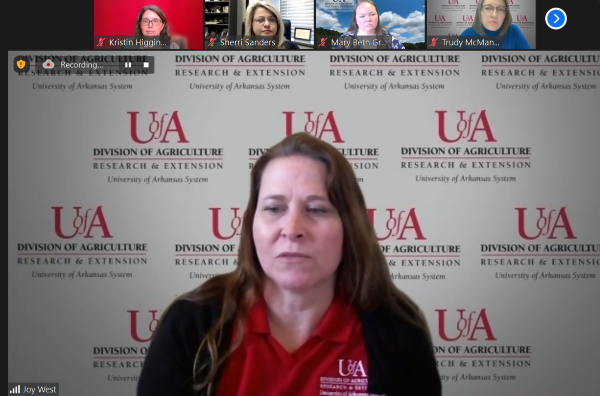 Sherri Sanders, an Extension agricultural agent in White County, talked about a horticulture program with the state prison system that teaches inmates about taking care of plants, with the idea that they have another skill to land them a job when they are released.

Sanders was joined by three other county Extension agents for a panel discussion on the work they do in jails or with people recently released.

Their ultimate goal is for people to have the skills they need to have a healthier life and not fall back into what sent them to jail in the first place. The county agents, some of several agents who work with this population, said they hope they can work with these groups again soon.

Educational programming such as theirs is still a new concept for many Arkansas lockups because jails hold people short-term. The agents said they tried to pack as much in to one class because they weren’t sure they’d ever see those people again.

A recent survey of Arkansas jail administrators found that 53% of respondents offered structured programming to reduce recidivism within their facility, while 47% did not.

The survey conducted by Daniel Pletcher, a Masters in Public Administration graduate student at Southern Arkansas University, received 20 responses over the one month it was delivered in 2021. Kristin Higgins with the Public Policy Center assisted Pletcher on creating the 24-question survey. 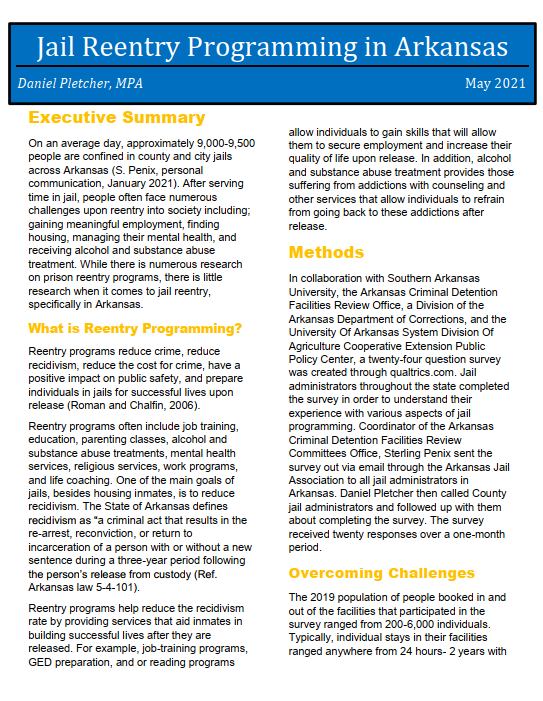 Administrators of jails with programming said they needed funding, training, and a connection with willing community organizations to continue offering programming in the future.

They were asked about the type of programming offered and who offered it. For example, was a drug and alcohol addiction class offered? And if yes, was it by a religious organization or secular organization?

Respondents who offered programming in 2019 – the last typical year before COVID shut down many programs – said they offered these topics:

One of the programs highlighted in Pletcher’s policy brief was the Garland County Extension’s Master Gardener program. Volunteers worked with people incarcerated at the Garland County Jail to start a greenhouse and community garden. In 2020, people in jail collected over 600 pounds of vegetables that were donated to a local food bank.

Some of his recommendations for county officials included: (1) incorporating objective jail classification by grouping those in custody by their needs in order to provide effective programming to individuals. (2) applying for grants specifically for jail programming. (3) Reaching out to community organizations to see if they could assist with programming. (4) Evaluate existing programs to measure effectiveness.

But Pletcher also had recommendations for community members – that they reach out to their local jails and see how they or their organizations can contribute beyond tax dollars.

“Donate time, funding, supplies, and/or equipment that jails can use to provide programming,” Pletcher’s report states.

Finally, for policy makers, the report suggests increased funding for local jails to create or expand programming within their facilities and to reform policies to incentivize re-entry efforts in county and city jails.