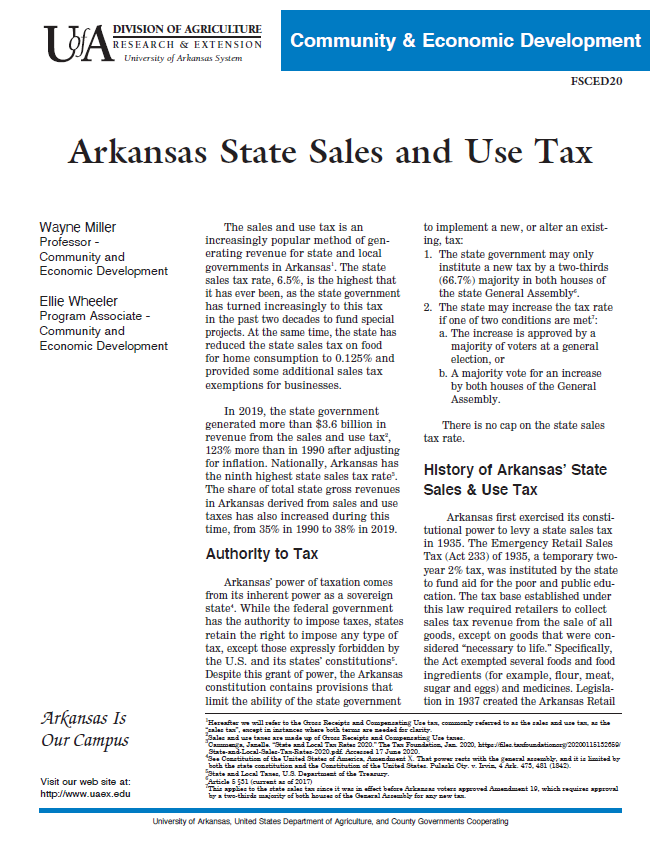 Do you know how much revenue Arkansas' state sales tax generates every year and what services are provided with this money, or how our tax rate compares to other states? The Community, Professional and Economic Development unit has published a new Arkansas State Sales Tax fact sheet detailing how the state sales tax works.

Arkansans have been paying state sales tax since 1935 when the state legislature enacted a temporary two-year 2% tax. Since that time, the state tax rate has grown to 6.5%.

In 2019, the state government generated more than $3.6 billion in revenue from the sales and use tax, 123% more than in 1990 after adjusting for inflation. During that time, Arkansas has come to rely more on the state sales tax for revenue and has used this tax more frequently to fund special projects.

The state sales tax revenue has been used to fund many different programs and services. The first sales tax in 1935 was enacted to fund aid for the poor and public education. For many decades, Arkansas’ state sales tax revenue went primarily into the General Revenue Fund, the main pot of money that is used to fund state programs and operations at the discretion of the legislature. However, over the past three decades lawmakers and voters have used the state sales tax more frequently to fund programs directly, by dedicating the revenue to special fund accounts. Since 1990, there were five increases in the sales tax rate, four of which were for financing special programs.

Earmarked portions of the Arkansas state sales tax have been used to directly fund special programs like the Conservation Tax Fund, the Property Tax Relief Fund and the Educational Adequacy Trust Fund. Most recently, Arkansas voters passed Constitutional Amendment 91 in 2012. This temporarily increased the state sales tax by 0.5%, beginning in 2013, to maintain and improve Arkansas’ system of state highways, county roads and city streets.[1]

The reliance on sales tax varies greatly across the United States. Five states currently have no state sales tax, while Arkansas’ 6.5% sales tax is the highest that it has ever been, making it the ninth highest state sales tax rate.

Learn more about the Arkansas state sales tax, how it is administered and its impact on state revenue and households in our fact sheet.

[1] A proposed constitutional amendment to replace this expiring tax with a permanent 0.5% state sales tax for roads (Issue 1) will be on the ballot in November 2020. Read about Issue 1 at www.uaex.uada.edu/issue1