Arkansas 2020 Ballot Issues – Where they passed and failed

Arkansas voters ended lifetime term limits for state legislators and created another permanent source of funding for road construction and maintenance on Tuesday in the 2020 General Election.

Note: The results below come from the Arkansas Secretary of State's website. They are unofficial and have not yet been certified by county election commissions across the state. The final numbers may change slightly in the next few days but not enough to change the outcome. Newton County's results were not reported as of the time the website was accessed. 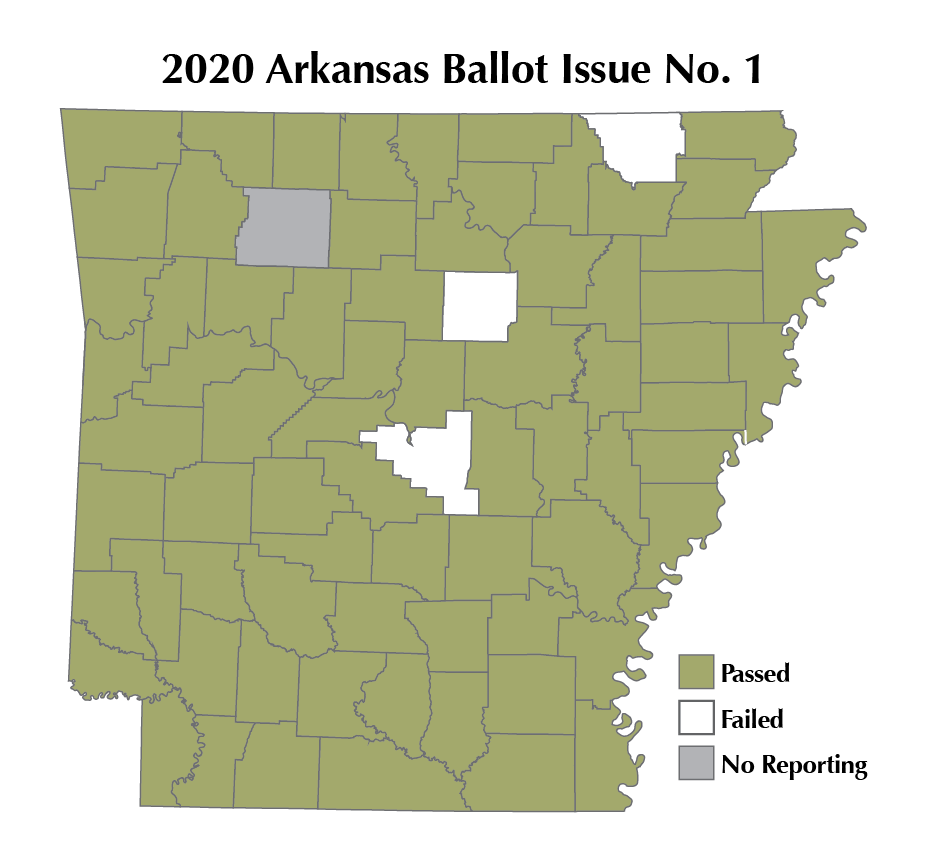 The sales tax passed in every county except Cleburne, Pulaski and Randolph counties.

With the passage of Issue 1, the state's sales tax rate of 6.5% doesn't change. The tax approved Tuesday will replace an existing one that sunsets in June 2023. There will be a seamless transition between the two sales taxes.

Funding from this new sales tax will be split the same between the state, counties and cities (70% state/30% county/30% city). Cities and counties across the state had passed resolutions expressing their support of Issue 1. Their road budgets would have been negatively impacted had Issue 1 failed.

The sales tax is expected to generate $293.7 million a year in revenue. Of that, $205.6 million would be allocated to the State Highway and Transportation Fund, $44 million to cities, and $44 million to counties, according to an impact statement written by the Arkansas Department of Finance and Administration about the amendment. 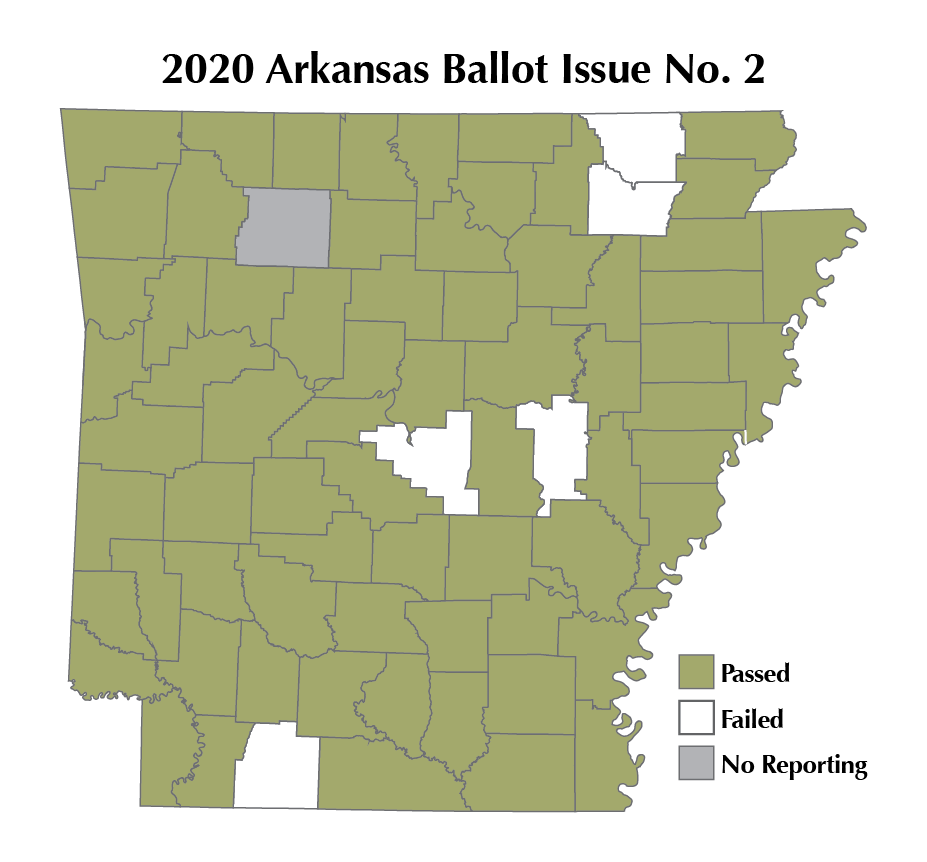 Voters also approved Issue 2, which ends life time term limits for state legislators and allows legislators to run for re-election after a break in office. The amendment passed by a vote of 55% FOR (632,874 votes) to 45% AGAINST (510,556 votes).

Issue 2 passed in every county except Columbia, Lawrence, Prairie, Pulaski and Randolph counties. This is the third amendment Arkansas voters have approved related to lawmaker term limits since 1992.

There was greater support statewide for Issue 2 than there were for changes to term limits approved by voters in 2014. In that election, 37 counties voted against the amendment but the proposal ultimately passed and put into effect what we have today.

The changes contained in Issue 2 will take effect in January 2021. Future legislators will be limited to serving 12 years in a row, but they would be allowed to serve again after a four-year break.

Current legislators and those elected this week can still serve 16 years. They will then fall under the new rules and be eligible for re-election. 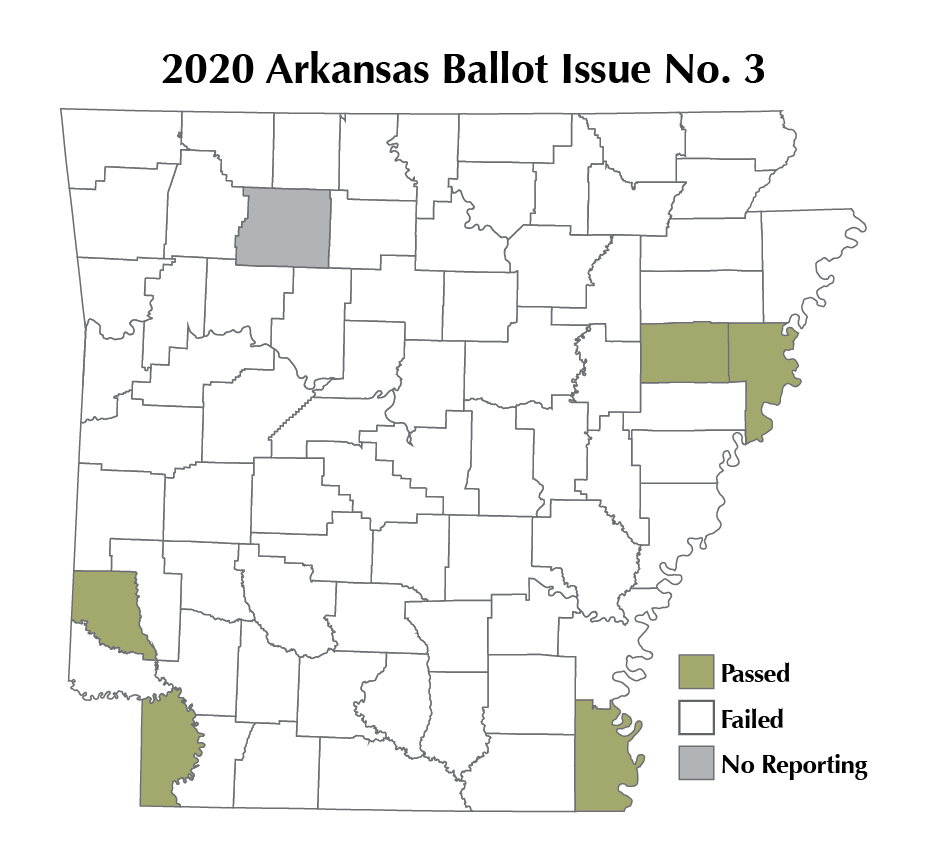 Arkansas is one of 15 states where citizens have the right to refer constitutional amendments, state laws and referendums to voters. We are one of three southern states with this process in place. (An attempt to change Florida's citizen initiative process also failed yesterday.)

For the citizen initiative process, Issue 3 had proposed:

(1) increasing the number of counties where voter signatures on petitions must come from,

(2) eliminating the ability to gather additional signatures after initial petitions are submitted,

(3) moving up the voter petition submission deadline, and

The proposal failed in every county except Chicot, Crittenden, Cross, Miller and Sevier counties. This issue had the most voter "roll off," where voters skipped the issue completely. 80,537 people who voted in the general election skipped over Issue 3.

The Public Policy Center at the University of Arkansas System Division of Agriculture has provided neutral, research-based fact sheets on every statewide ballot issue since 2004. The purpose is to provide voters with a better understanding of what is being asked on them.