All universities engage in research and teaching, but the nation's more than 100 land-grant colleges and universities, have a third critical mission—extension. "Extension" means "reaching out," and—along with teaching and research—land-grant institutions "extend" their resources, solving public needs with college or university resources through non-formal, non-credit programs.

Congress created the extension system nearly a century ago to address exclusively rural, agricultural issues. At that time, more than 50 percent of the U.S. population lived in rural areas, and 30 percent of the workforce was engaged in farming. Extension's engagement with rural America helped make possible the American agricultural revolution, which dramatically increased farm productivity:

That increase in productivity has allowed fewer farmers to produce more food.

Yet, the extension service still plays an important role in American life—rural, urban, and suburban. With its unprecedented reach—with an office in or near most of the nation's approximately 3,000 counties—extension agents help farmers grow crops, homeowners plan and maintain their homes, and children learn skills to become tomorrow's leaders.

Despite the decline in the population and economic importance of rural America, the national Cooperative Extension System remains an important player in American life. It increasingly addresses urban, suburban, in addition to rural issues, and it has responded to information technology changes in America. Extension expertise meets public needs at the local level with approximately 2,900 extension offices nationwide.

Beginning of Extension in the United States

The roots of U.S. agricultural extension go back to the early years of our country. There were agricultural societies and clubs after the American Revolution, and in 1810 came the first Farm Journal. It survived for only 2 years, but in 1819 John Stuart Skinner of Baltimore began publishing the American Farmer. Farmers were encouraged to report on their achievements and their methods of solving problems. Some worthwhile ideas, along with some utterly useless ones, appeared on the pages of the publication. 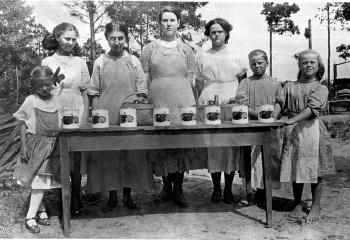 1912 -- The Extension Homemakers Council is established out of home demonstration work, and agents are hired to teach girls in canning clubs.

Smith-Lever mandated that the federal government (through USDA) provide each state with funds based on a population-related formula. Today, the National Institute of Food and Agriculture (NIFA) distributes these so-called formula grants annually.

President Woodrow Wilson called the Smith-Lever Act "one of the most significant and far-reaching measures for the education of adults ever adopted by the government."

The extension service's first big test came during World War I, when it helped the nation meet its wartime needs by:

More generally, extension's role in WWI helped it expand its reputation as an educational entity to one that also emphasized service for individuals, organizations, and the federal government.

The Victory Garden Program was one of the most popular programs in the war period, and extension agents developed programs to provide seed, fertilizer, and simple gardening tools for victory gardeners.

An estimated 15 million families planted victory gardens in 1942, and in 1943 some 20 million victory gardens produced more than 40 percent of the vegetables grown for that year's fresh consumption.

Between 1950 and 2007, the number of farms in the U.S. declined dramatically—from 5.4 million to 2.2 million. Because the amount of farmland did not decrease as much as the number of farms, many of the remaining farms have a much larger average. However, the number of small farms has also increased during the past ten years. During the same period, farm production increased from one farmer supporting the food needs of 15.5 persons in 1950 to one farmer supporting 100 persons in 1990. By 2007, one farmer supported the food needs of almost 155 people. That increased productivity, despite the decline in farm numbers, resulted from increased mechanization, commercial fertilizers, new hybrid seeds, and other technologies. Extension played an important role in extending these new technologies to U.S. farmers and ranchers.

Beginning of Extension in Arkansas

About the earliest recorded historical fact pertaining to Extension work in Arkansas is the establishment of the Arkansas Industrial University (the land- grant college) in 1872, founded in accordance with the Morrill (federal) Act of 1862. In 1875, the Arkansas General Assembly authorized the holding of agricultural and mechanical fairs. The Arkansas Agricultural Experiment Station under the Hatch (federal) Act became active in 1888. A year later, the General Assembly created the Bureau of Mines, Manufacture, and Agriculture, with a commissioner in charge whose duties were primarily regulatory. However, he was expected to encourage and promote interest in other agricultural work and, especially, to keep an exhibit at his office in the state capitol building.

The first Cooperative Extension work conducted by the University of Arkansas was in 1905 when several Farmers' Institutes were held, but this work was limited because of a small state appropriation. Later the number of institutes held was increased as larger appropriations were made. These were discontinued after the Smith-Lever Act went into effect in 1914.

The Farmers' Cooperative Demonstrative Work of the United States Department of Agriculture under Dr. Knapp's direction was begun in Arkansas in 1905 with the appointment of J. A. Evans as state agent and A. V. Swatty as district agent. By 1907, four district agents and seven county agents had been appointed.

4-H club work was started in 1908 and home demonstration (canning clubs) work was begun in 1911. The first African-American county agent was appointed in 1914.