This is a plant my son has had in his yard for the 15 years he has owned his home; it came with the house. He doesn’t know what it is called. The blooms only last a couple days. Hummers and butterflies aren’t attracted to it. I should mention his home is in Southern California. Do you know what this plant might be? 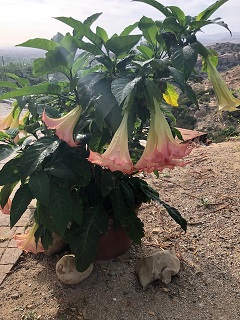 The plant in question is a Brugmansia commonly called Angels Trumpet.  This plant can overwinter outdoors in Arkansas, but many move it inside for the winter to make sure it grows larger and blooms earlier. I think its range of hardiness is limited to central Arkansas and southern parts, but I do have MGs that have had it survive in Fayetteville.  If it is planted in the ground, it dies back totally until spring, and starts the season over.  The flowers can be pink, white, orange or apricot.  The entire plant is poisonous.

We tried to grow moonflowers a couple of times many years ago here in Union County, but they never survived. They are a desert plant (we grew them in Tucson), so I don’t know if it’s too wet here or if the soil is not alkaline enough. Last year we had a moonflower come up mysteriously in a spot next to the house where we have never before tried to grow one. I have no idea where it came from. But it grew about 2 feet high, had a couple of flowers, but did not set seed. It finally died down. I just noticed this morning that it has come back. Should I get something to make the soil alkaline (like what?) or is there something else that can be done to make our environment more accommodating?

There are two plants commonly called moon flower.  One is the annual moonflower vine which is a morning glory - Ipomoea alba.  I think the plant you are referring to is the moonflower datura --Datura inoxia.  The datura is in the same genus as jimsonweed. All daturas are poisonous.  Another common name is angel trumpet—which is also the common name for brugmansia, whose large trumpet shaped blooms hang downward.   The moonflower datura has large, fragrant white blooms that open at night and close when the sunlight hits them.  They are a short-lived perennial and should come back from the root system for a couple of years, but they can also set some spiky seed pods. There are also some purple and double purple and white varieties.

Could you tell us the name of this tree or plant??  And also where one may be purchased. 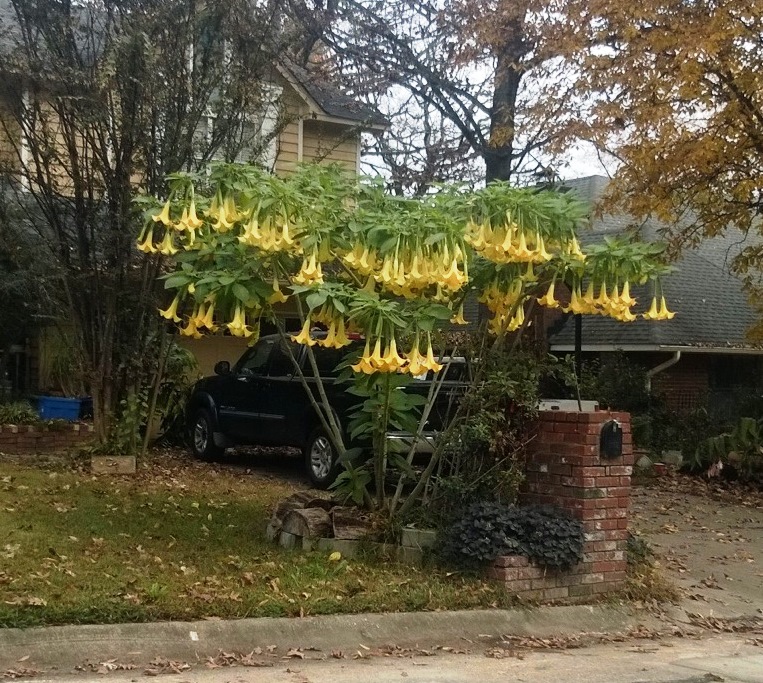 Wow! That is one stunning Angel’s Trumpet – Brugmansia species.  These plants are becoming more and more popular.  The other plant commonly called angel trumpet is Datura.  Brugmansia plants were typically considered winter-hardy only in southern Arkansas for years, but are now surviving outdoors even in NW Arkansas with just a little extra mulch.  They do die back to the ground after a killing frost, but they can grow up to 6 feet tall or more in one growing season and bloom in late summer to fall.  Flower colors range from yellow to pink and a pale orange.  Some gardeners want larger plants and earlier blooms, so they do keep them in containers and move the pot inside for the winter.  This allows the plants to begin growing from the top not the soil line.  They are often available at Master Gardener plant sales in the spring since they do make a good “pass-along” plant.  Some nurseries will also carry them with other tropical plants.