Crape-murder . . . rape of the crapes. . . butchering—call it what you like, but there are serial homicidal pruners of crapemyrtles out there, and the trend continues despite the best efforts of horticulturists across the south.  Standard crapemyrtles have the potential to be wonderful small trees, if they aren’t chopped to their knees annually!

Crapemyrtles are probably the most incorrectly pruned plants we grow, with "crape-murder" being the norm, versus the exception. 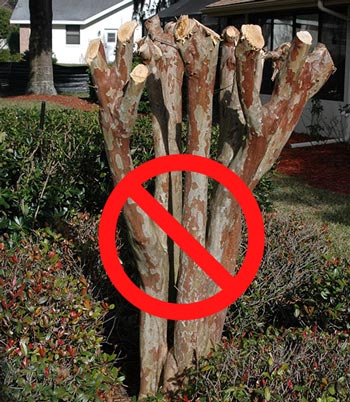 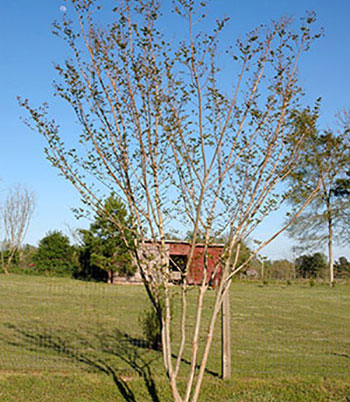 When should I prune?

Crapemyrtle trees bloom on the new growth, so any pruning that is needed should be done prior to new growth beginning—for most of the south, this will be from mid February through mid March. Crapemyrtles are often one of the last plants to begin growing in the garden, waiting on warmer temperatures; so don’t worry if February is slipping away on you.

While some gardeners begin pruning in the fall after the leaves have fallen, avoid this for two reasons:

Well-established and well-structured plants may not need annual pruning.  Doing a good job of pruning while the trees are young, will build in the structure and form you need, and require less care when the trees are older.

Watch a Demonstration of How to Properly Prune Crapemyrtles

A common and devastating mistake made while pruning crapemyrtles is the practice of "topping" off the beautiful plant. Dr. Jim Robbins shows the proper techniques for pruning your landscape crapemyrtle in the video below.