How to Identify and Treat Crapemyrtle Bark Scale | What is wrong with my crape myrtle?
skip to main content
Resource Library

Crapemyrtle Bark Scale - What is this white stuff on my crapemyrtle trees?

Since the initial sighting in 2004, the crapemyrtle bark scale (CMBS) insect has been spreading at an alarming rate across the Southeast. The insect was first noted in McKinney, Texas (self-designated as America’s “crapemyrtle city”), in 2005 and had spread throughout most of the Dallas-Fort Worth area by 2010. The scale was reported in Ardmore, Okla., and Shreveport, La., in 2012 and Houma, La. (60 miles southwest of New Orleans) in 2013.

How can I identify crapemyrtle bark scale? 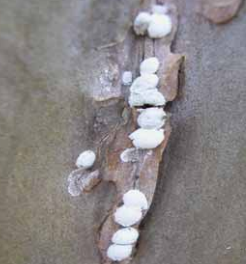 Up close, CMBS is white to gray in color and approximately 2 mm in length. Careful examination may reveal dozens of pink eggs or crawlers under some of the larger white scale covers.

If left undetected or untreated, the CMBS will spread rapidly.  A heavy infestation will result in white crusted clusters of insects which may blanket small stems and be quite visible on the trunks. If you get up close or use a magnifying glass, you will see that the adult is white to gray in color and there may be dozens of pink eggs or crawlers under some of the larger white scale covers. It is suspected that there may be at least two generations in Arkansas.

Sooty mold appearance - what is it?

Most gardeners will be alerted to CMBS by black sooty mold which appears on the bark . The presence of sooty mold may confuse the diagnosis since that is also commonly associated with a significant aphid problem. This sooty mold  grows on a by-product of sucking insects including scale and aphids. As these insects feed, they give off a sweet substance called honeydew. Wherever this honeydew lands, the stems, leaves and trunk get very sticky and then a black sooty mold will form. If that sooty mold is accompanied with white specks on the trunks or branches, that is the crape myrtle bark scale, and is cause for action.

Still not sure if you have scale?

Send our experts a photo    and ask for their advice.

No need to remove your trees if you suspect infestation. However, treatment is necessary. The scale will NOT kill your trees but they reduce the amount and size of the blooms and the sooty mold makes them less attractive.

How do I treat for crapemyrtle bark scale?

Systemic insecticides work very well to control the bark scale, but the timing is most effective when applied in late winter/early spring.

How can I keep scale from spreading?

If you have small limbs which are heavily infested prune them off and dispose of them. Do not put them in a compost pile, or put them out on the curb for yard-waste pick-up. In a perfect world, burning the debris would be the best way to eradicate the pest, but unfortunately we can’t burn refuse in the city.

Left exposed in an open truck or put on the curb for yard waste pickup leads to a possibility that the millions of tiny crawlers could be easily spread to neighboring properties, thus accelerating the spread of this invasive insect. Instead, double bag the cuttings and put them in your regular trash pickup

Be aware, once the insects die, they will still be on the plant, but no longer causing damage and not spreading. There is no need to do preventative treatment, so only treat a tree that has the insect problem—but do monitor all the crape myrtles in your yard. The sooner you can catch the problem, the easier and quicker the problem can be solved.

Is your county included in infestations? Look at this map to find your county and please take a picture of the tree with symptoms and/or a sample in to your local county extension office.