Growers need forecast precipitation to be a ‘slow, soaking rain’

TRUMANN, Ark. — Arkansas’ thirsty farm fields and emptying reservoirs may get some relief this weekend, with hopes that the forecast rainfall is gentle rather than furious, said Mike Hamilton, extension irrigation educator for the University of Arkansas System Division of Agriculture.

Weeks of triple-digit highs and dry weather at a time when crops are at peak water need have prompted Arkansas farmers to drive their irrigation equipment relentlessly. As pastures and hay meadows dry to a crisp, ranchers have had to sell cattle they can no longer feed. 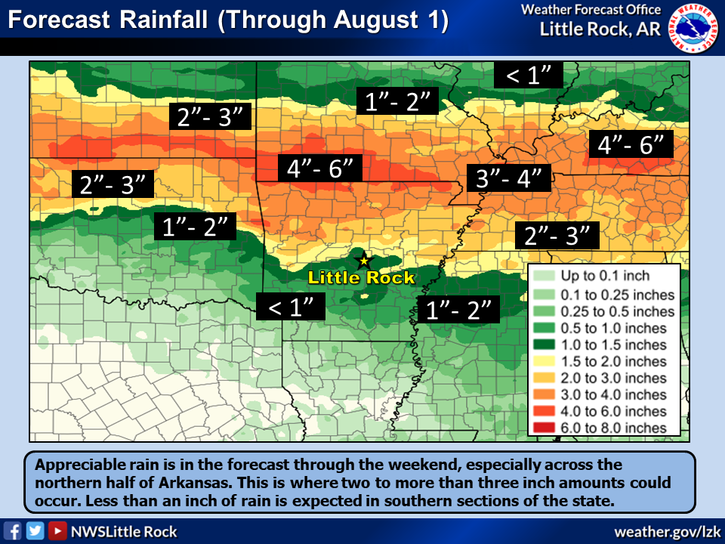 The U.S. Drought Monitor map released Thursday showed extreme drought growing from 1.35 percent of Arkansas in the previous week to more than 22 percent.

There was good news from the National Weather Service at Little Rock this week, with a forecast that showed up to 6 inches of rain in some spots through Monday. The areas with the highest forecast totals are near the Missouri border, with expected totals declining southward across Arkansas.

Many “reservoirs in the state are being tapped right now, as are our streams and bayous,” Hamilton said. “Some of my growers down in the Stuttgart area were having to make the decision on whether to use what surface water they had left to finish off rice or corn, which was closer to the finish line than their soybean crop.

“Hopefully they’ll get some rain to replenish that surface water,” he said.

While the water is welcome, there is still a risk for growers.

“We need a good slow, soaker,” Hamilton said Thursday. “We don’t anything that could cause lodging or crop damage. We definitely need a slow soaker.”

High winds and heavy rain can knock over, or lodge, crops which can make harvest difficult. Heavy rain can also wash out young plants.

Travis Shelton, forecaster for the National Weather Service office at Little Rock, said that what’s happening through Monday “is a typical pattern for what we call ‘training,’ where storms continue to develop and move over the same areas,” he said.

“Through this weekend, we have several chances of pretty good rainfall and those chances are better in the afternoons. That afternoon heating helps get things more unstable and there’s plenty of moisture in the air,” he said.

Shelton said the Weather Prediction Center has pegged the areas near the Arkansas-Missouri border with a slight risk for excessive rainfall, with that risk potentially increasing for northeastern Arkansas and southwest Missouri.

“The uncertainty with the flood potential has a lot to do with the very dry soil from the drought conditions we've been experiencing and the difficulty with predicting where the heavy rain producing cells will occur,” he said.

Elsewhere in the state, the rainfall totals could be hit and miss.

“We’ll see several rounds of isolated showers,” Shelton said. But “there could be some places that see less” than the totals forecast by the models.

Alas, Arkansas’ rainy reprieve will be a short one.

“That ridge of high pressure that we have been seeing in recent weeks or months that has been blocking the pattern and keeping rain from coming to the state, will return,” Shelton said, bringing back warm, dry days.

That rain-blocking ridge is typically associated with La Niña, but “every year is different,” Shelton said. “Last year, was a La Niña summer and we didn’t see this type of blocking.”