USDA 2021 crop production report has two records and one asterisk.

(Newsrooms: this story may be updated; file art may be found here: https://flic.kr/p/2mDonEo;

JONESBORO, Ark. — Arkansas’ rice and cotton crops both hit record yields in 2021 as expected, while yields for corn and soybeans were roughly the same as the previous year, according to Wednesday’s report from the U.S. Department of Agriculture that summarizes 2021 crop production.

However, for cotton, there is one caveat. Wednesday’s figure isn’t final. 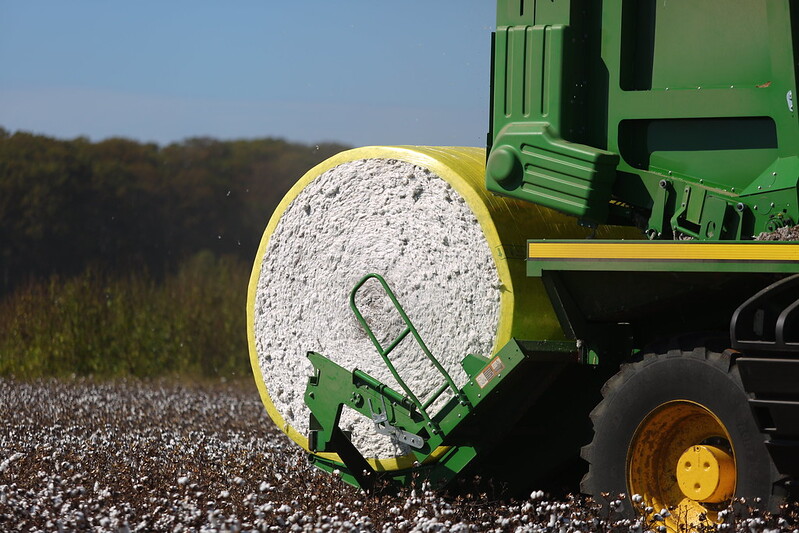 RECORD* -- USDA reported Arkansas cotton having a record state average yield in 2021, but the final numbers won't be in until May. (Division of Agriculture file image)

For cotton, “USDA reduced the average yield 24 pounds to 1,263 pounds of lint per acre, which is still a record,” said Scott Stiles, extension economist for the University of Arkansas System Division of Agriculture. “However, this is not the final yield estimate. For cotton, that will be released in May.”

Why May? “Ginning is still ongoing in Texas and the High Plains,” he said. The figures will be released alongside the National Agricultural Statistics Service final Cotton Ginnings Annual Summary.

Bill Robertson, extension cotton agronomist, said the report “bumped planted and harvested acres by 5,000 from the December report. This resulted in the December yield estimate of 1,287 pounds of lint per acre to drop to 1,263.”

Arkansas ranked fourth in planted cotton acres and fourth in upland cotton yield per acre and was third in production. Harvested acres moved to 475,000, compared to 520,000 last year.

“Compared to last year we were down 9 percent in acres but was down only 2 percent in production,” Robertson said.

Jason Kelley, extension wheat and feed grains agronomist for the Division of Agriculture, said Arkansas corn acres were the second-highest since about 1954, thanks to a "combination of better grain price prospects than in previous years, but also a much better planting window that allowed corn to be planted timely also a factor."

See the year in corn and other feed grain production.

See the year in Arkansas peanuts.

RICE — USDA added 30 pounds to the average yield for Arkansas, taking it up to 7,630 hundredweight per acre, a record. That’s an increase from 7,500 hundredweight in 2020.

See the year in Arkansas rice.

SOYBEANS — As it did with corn, USDA added a bushel back to the average yield taking it up to 51 — half a bushel less than last year. Harvested acres stood at 3.01 million, which was up from 2.8 million acres the previous year.

“The average price outlook increased 50 cents month-to-month to $12.60, which compared to $10.80 per bushel from the previous year,” Stiles said.

See the year in Arkansas soybeans.

WHEAT — “Surprisingly, wheat acres for Arkansas are expected to be down from the previous year,” Stiles said. “USDA put us at 170,000, which is down 19 percent from the year before.

“Wheat prices were attractive, but fertilizer prices were headed straight up last fall,” he said. “Input costs may have played a role in lower acres.”

Kelley said it was no surprise that wheat acres didn't increase, "even though grain prices were higher last fall than in several years. An uptick in fertilizer prices were a big concern as decisions on wheat planting were made."