LITTLE ROCK — Now that nearly every last soybean has been harvested from the fields of Arkansas, Jeremy Ross, extension soybean agronomist for the University of Arkansas System Division of Agriculture, can put the harvest in perspective. 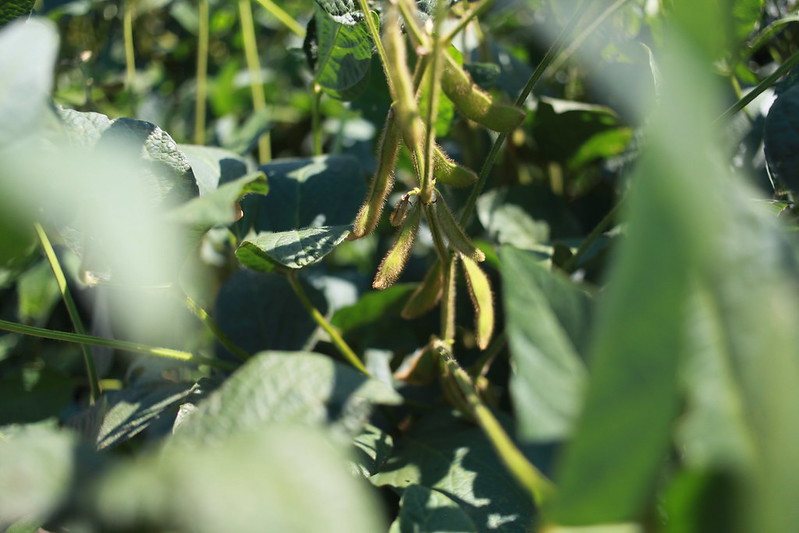 FIELD OF GREENS — Despite a challenging season, Arkansas soybean growers managed an estimated average yield of 50 bushels per acre, right in line with the last several years, according to preliminary figures from the U.S. Department of Agriculture. Total soybean acreage was just over 3 million acres. (Division of Agriculture photo.)

“We had a good year,” Ross said. “But we could’ve had a really good year.”

The caveat being, of course, the record rainfall and flooding event that struck southeastern Arkansas during the first week of June. With about 600,000 acres of corn, cotton, rice and soybeans damaged, Ross and other experts estimated a loss of about $70 million in soybean production alone.

And while many growers replanted in soybeans, they knew they were likely to see significant yield reduction in those acres, given the late date, relative to the planting and growing seasons.

“Talking to growers that had to do replanting in that area, they’re pleased with what they got,” Ross said. “But of course the yields aren’t as high as they could’ve been had that flooding event not occurred, had they not needed to replant. Some of those growers lost one to two months’ worth of progress when that flood came in June.”

Ultimately, Arkansas soybean growers managed an estimated average yield of 50 bushels per acre, right in line with the last several years, according to preliminary figures from the U.S. Department of Agriculture. Total soybean acreage was just over 3 million acres.

Other challenges
Even before the June flood event, planting was an on-again-off-again affair throughout the spring, as intermittent rainfall limited good planting days to just a few a week, Ross said.

“We fell into a pattern in which it would rain Sunday, Monday, maybe Tuesday, so nobody could do anything during the week,” he said. “So maybe they’d get back in the field Friday or Saturday. And it seemed like that was the pattern for several weeks.

“That hurt us, for example, trying to get research plots planted,” Ross said.

After the June flood, soybeans then faced droughty conditions and tended to be neglected as growers prioritized irrigating corn, cotton and rice, all of which were in more critical growth stages than soybeans in July and August.

Happily, for soybean growers, the crop was not as badly injured by the widespread fall armyworm outbreak as other crops, because there are more effective modes of action to control the pest in soybeans.

The last hurdle for the crop was the abnormally warm weather throughout October, which led to green stem and other quality issues going into harvest for some fields.

Higher prices, higher costs
Market prices for soybeans, which had long dwelled well below $10 a bushel, soared above $12 in 2021, making the commodity more profitable than it had been in several years. But 2022 may challenge that profitability, even if commodity trading remains high.

“Costs are going to be elevated in 2022,” Ross said. “Fertilizer and fuel costs will be up; pesticides are in short supply, so the prices will go up; and labor is still an issue.

“We’re already looking at 2022 budgets,” he said. “If you look at just fertilizer and fuel costs on the soybean budget, we’ve got a $71 an acre increase compared to the 2021 budget. That’s not including labor, pesticides, etc. So even if you’re getting $12 a bushel, you’re looking at several bushels an acre going just toward paying that additional cost.”

As is the case with other major commodities in Arkansas, Ross recommended growers attend at least one winter production meeting during the coming months. Experts with the Cooperative Extensions Service will be available to educate and assist growers in deciding how to best reduce input costs while remaining profitable in 2022. To see a complete list of upcoming production meetings, visit https://bit.ly/2022-ARK-Winter-Meetings.