LITTLE ROCK — Peanuts again proved to be a popular, if somewhat niche, investment for Arkansas growers in 2021. 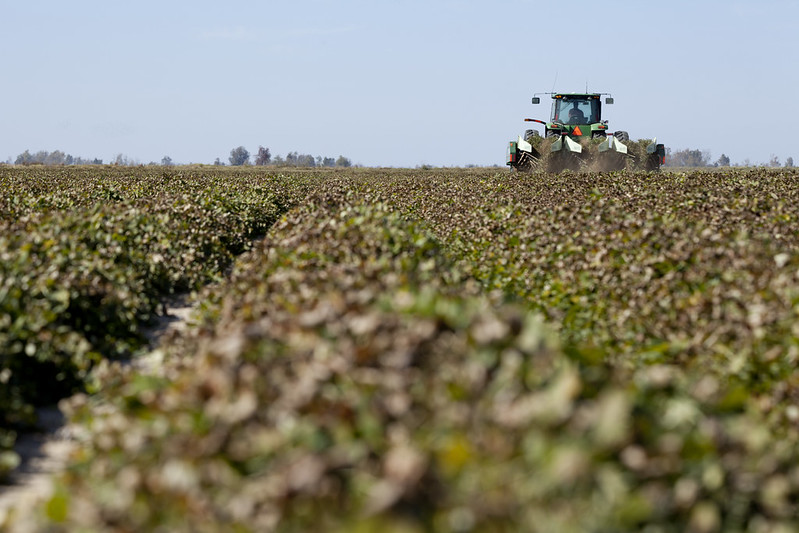 (ONLY SOMEWHAT) EASY PICKING — Despite relatively frequent rainfall in northeastern Arkansas, where a majority of the state’s peanuts are grown, most planted acres produced good yields. The rainy weather, which dominated both the planting and harvesting phases of the year, meant later-than-hoped-for peanuts — both going into the ground and coming out. (Division of Agriculture photo.)

Andy Vangilder, agriculture and natural resources extension educator for the University of Arkansas System Division of Agriculture, said that as long as growers can get about 5,000 pounds in yield per acre, peanuts will remain an economically attractive crop for the foreseeable future.

“The thing with peanuts is that you can plant it on your worst land,” Vangilder said. “They will make you money where nothing else will.”

Arkansas peanut growers averaged about 4,800 pounds per acre in 2020, according to the USDA Crop Production Summary, published in January of this year.

As of Dec. 7, USDA’s Farm Service Agency listed national peanut prices as ranging from about $413 a ton for Spanish peanuts to more than $427 a ton for Valencia and Virginia peanuts. Runner peanuts were listed at about $424 a ton.

Despite relatively frequent rainfall in northeastern Arkansas, where a majority of the state’s peanuts are grown, most planted acres produced good yields, Vangilder said. The rainy weather, which dominated both the planting and harvesting phases of the year, meant later-than-hoped-for peanuts — both going into the ground and coming out.

“We started out pretty good,” Vangilder said. “We had a pretty good planting season even if it was short. A lot of the plants were wet, and we had to do everything during a narrow window.

“This happens to some degree every year,” he said. “A number of plants get planted in less-than-desirable conditions, a little early, and you end up with some skimpy stands. But overall, we had a nice, good-looking peanut crop the majority of the year.”

While growers in some areas of Randolph and Lawrence counties struggled with outbreaks of sclerotinia, a pathogenic fungus that often affects peanuts to some degree each year, disease pressure was relatively low for Arkansas peanuts in 2021, Vangilder said.

The plant’s utility notwithstanding, Arkansas peanut acreage in 2022 could be reduced slightly in the shadow of high market prices for cotton, soybean and other crops, Vangilder said.

“If cotton stays about $1 a pound, and soybeans keep selling for $12 or $13 a bushel, you may see growers start to change their minds about peanuts,” he said. “But we really don’t know what the markets will do, one year to the next.”