STUTTGART, Ark. — A win is still a win, even with an asterisk.

For several years now, Arkansas rice yields have been chasing the record, set in 2013 and then tied in 2014, of about 168 bushels per acre. After four years of hovering at 167, it looks as though the state’s growers are closing in on a new record, at or very near 169 bushels. The catch, however, comes after the harvest. 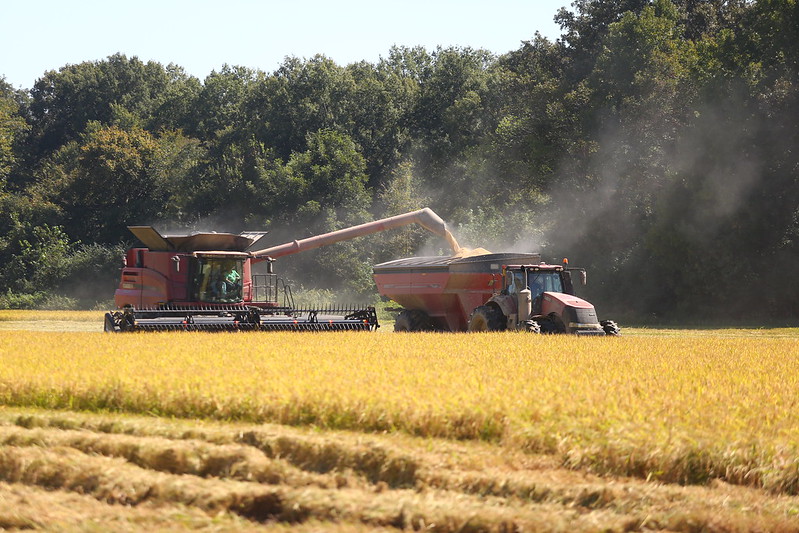 2021, IN THE BAG — For several years now, Arkansas rice yields have been chasing the record, set in 2013 and then tied in 2014, of about 168 bushels per acre. After four years of hovering at 167, it looks as though the state’s growers are closing in on a new record, at or very near 169 bushels. (Division of Agriculture photo.)

Jarrod Hardke, extension rice agronomist for the University of Arkansas System Division of Agriculture, said that there are indications milling yields will exert a distinct downward pull on the state’s final rice production numbers.

“An old-school theory is that conditions that lead to higher rice yields also lead to higher milling yields,” Hardke said. “And that can happen, but it’s by no means a guarantee. Getting a high percentage of whole kernel rice and fewer broken kernels really has a lot to do with the fall conditions. Once the crop is already made and is beginning to dry down for harvest — that’s when you find out if conditions are really conducive to good milling yields.”

Nevertheless, Hardke said, 2021 was a win for Arkansas rice farmers.

“The milling aspect is a concern for growers and everyone else in the industry,” he said. “It affects everyone’s bottom line, but it was a very successful 2021 season. That’s the give-and-take to the year.”

A wet spring, hot summer, and a fall all over the place

Arkansas rice growers struggled in the spring to get rice into the ground, as “yet another in a string of wet years” made it difficult for producers to work up momentum, Hardke said.

“We struggled early in the season, but that then turned into high temperatures over the summer,” he said. “Clearly, better weather makes better rice — or it makes more rice, anyway.

During the first week of June, a record 48-hour rain event brought significant flooding to parts of southeast Arkansas, destroying approximately 600,000 acres of crops. Although rice acres were not the hardest hit, Hardke said the event did impact total rice acres and production.

The high summer heat helped support 2021’s record rice yield, although it also contributed to some of the aforementioned milling losses.

“Once we got to the latter part of August and beyond, it seemed like we had extremely heavy dew periods throughout,” he said. “It was very wet and staying very warm. Meaning that all those kernels in the field that were pretty mature were getting re-wetted at night, then drying back out during the day. That can form fissures or cracks — and the more that happens, the more cracks form, and the worse they are.

Once it reaches “maturity and the crop’s drying down, only bad things can happen to that rice,” Hardke said. “Anything that is going to increase the amount of broken kernels you end up with in the milling process — it’s going to lower the milling yield, and by extension, lower what you get paid for your rice.”

Many growers also experienced high levels of peck damage in rice, which is often associated with stinkbug damage. The industry standard is known as “55/70” — meaning that in a given bushel of rice, 55 percent of it should be “head rice,” which is the whole kernel rice grain, and 70 percent should be “total rice,” which is everything that remains after the hull and bran have been removed. Growers are paid a premium for exceeding that whole kernel standard but are discounted for falling below the standard.

Hardke said that the immediate impacts of this will be felt by growers, who will be paid less for their crop, and by buyers, who will have to mill more rice to fill existing grain orders. He said consumers will likely not see any impact in terms of product availability in the short term.

On the world stage

While many parts of the world faced new struggles in 2021, global rice production — as well as consumption — continued to increase.

Alvaro Durand-Morat, assistant professor for the Division of Agriculture, co-authored the “2021 Markets in Review” December report for the Fryar Price Risk Management Center of Excellence, part of the Dale Bumpers College of Agriculture, Food and Life Sciences. He found that global rice production is expected to reach more than 511 million metric tons in 2022, representing a 10 percent increase over the past decade.

The bulk of that production, Durand-Morat said, has come from increased yield, as rice acreage has only slightly increased. Global rice demand is estimated at 509 million metric tons, just short of projected production.