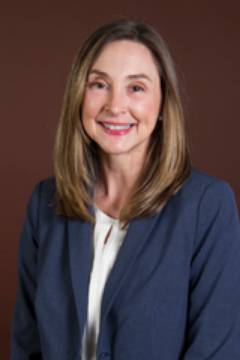 This is a brief biographical sketch of Dr. Laura Hendrix, who is the liaison between the Arkansas Extension Homemakers Council and the University of Arkansas System Division of Agriculture Cooperative Extension Service.

Last year she was named the liaison between the Arkansas Extension Homemakers Council and University of Arkansas System Division of Agriculture Cooperative Extension Service. She succeeded Betty Oliver, who died April 9, 2016.

In mid-October, Dr. Laura had her first official chance to meet and

greet Extension Homemakers en mass as she attended the three districts' Presidents Days. She was the keynote speaker at each event and introduced herself to the assemblies.

She shared her wide-ranging employment, which includes job on both the county and state levels. Her first job with Extension was in Lonoke County, where she interned for five months. Other jobs have been home economics agent, family and consumer science agent, assistant clothing specialist, 4-H agent, 4-H program tech, family and consumer science program associate, instructor and associate professor,

She grew up on a farm and was called Cricket until she started school.

She shared a number of photographs:

Because of family and jobs, she has been associated with several towns in Central and Northwest Arkansas. Her first home was in Farmington (Washington County) and she attended college in Fayetteville. Her father's family farm, of which she is part owner, is located in Malvern. She was a home economics agent in Sheridan and a 4-H agent in Conway. She works in Little Rock and lives in North Little Rock.

A third-generation,10-year member of 4-H, her Mother and Grandmother were both Extension Homemakers.

Her hobbies include lifelong learning, ukulele and physical activity, including running, kickboxing, strength training and yoga for which she is training to be a certified instructor. Just for fun and to emphasize the benefits of yoga, she took the group through several poses.

And then she queried them on their knowledge of the organization. The other names of Extension Homemakers have been Home Demonstration and Family and Community Education clubs. The organization was started in 1912 and in 1941 there were 64,000 members.

Several other questions had similar answers, all having to do with the mission of Extension Homemakers – leadership development, education and community service.

She encouraged the group to take self-compassion breaks. Close your eyes and take deep breaths in and out. Think about things that are bothering you, acknowledge that hurt. Acknowledge the stress that it is a part of life.