There has been a lot of publicity about Africanized honey bees (the so-called "killer bees") in the media and popular culture, causing a great deal of alarm to the public. Are Africanized bees truly a threat or has their danger been exaggerated by tabloid journalists and Hollywood screenwriters?

The Truth about Africanized Honey Bees

They produce honey and are efficient pollinators for many types of flowering plants, including important food crops. The presence of Africanized bees in Arkansas does not indicate an end of beekeeping as a hobby or an industry. Experienced beekeepers will be the first line of defense against the spread of Africanized bees. The presence of beekeepers who maintain gentle, non-Africanized bees in hives are more likely to prevent swarms of unmanaged bees from becoming established in an area. Also, experienced beekeepers are the most knowledgeable about normal honey bee behavior and the safe handling and removal of bee swarms.

What's the difference between Africanized and European honey bees? 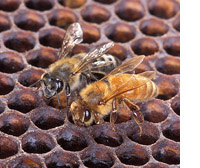 No one can tell the difference between Africanized and European honey bees simply by appearance.  Measurements of minute differences in the length of particular wing veins or exoskeletal plates, or a test of DNA, are needed to determine if a particular colony of bees is Africanized.

The single trait of the Africanized bee responsible for its bad reputation is a genetically-influenced tendency to be highly defensive about guarding and protecting its nest. All honey bee colonies have "guard bees" that patrol an area around their nest sites and fend off potential intruders. Honey bees die when they sting, and are reluctant to do so unless they feel that their home is directly threatened. Africanized honey bee colonies tend to have a larger number of guard bees, and tend patrol a wider area around the colony than European honey bees. When alarmed, Africanized bees tend to sting more readily and in larger numbers than the gentle European honey bees with which most people are familiar.

How did Africanized Honey Bees get here?

After having escaped from a breeding program in Brazil in 1957, Africanized honey bees have interbred with European bees throughout much of Latin America. Their presence in the U.S. was first detected in Texas in 1990, and their range has now expanded to include ten states (Arizona, Arkansas, California, Florida, Louisiana, Nevada, New Mexico, Oklahoma, Texas, and Utah). Since their introduction, relatively few deaths have been attributed to Africanized bees. A minority of people do have severe allergic reactions to bee and other insect stings, requiring immediate medical attention. 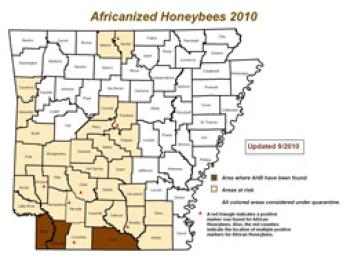 Africanized honey bees are extremely well-suited for survival in the tropics, but do not fare as well in temperate regions with long winters. For this reason, their populations may never become established at northern latitudes. However, much of Arkansas appears to be potentially within their range. The first of these bees were found in southeastern Arkansas in 2005. The Arkansas State Plant Board continues to monitor their presence and movement into and across the state.

How to Handle Suspected Colonies

Bee swarms from counties where Africanized bees have become established should not be moved, and the destruction of colonies from unknown sources is not recommended. If a swarm of bees in a quarantined county is hived, then the colony should be immediately requeened from a non-Africanized source. Report suspected colonies of Africanized honey bees do NOT attempt to remove or destroy the hive.

To report a suspected colony of Africanized honey bees contact the Apiary Section of the Arkansas State Plant Board at (501) 225-1598.

For more detailed information on the current status of Africanized honey bees in Arkansas, consult the Arkansas State Plant Board website.