Plant of the Week: Zinnias 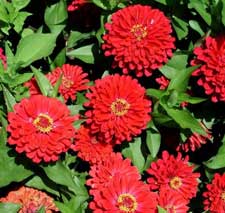 EVERYTHING OLD IS NEW AGAIN – Zinnias are old-fashioned flowers that are continually being reinvented by breeders and rediscovered by gardeners.

Everything old is new again. Nowhere is this truer than in fashion, especially the fashion of flowers. The length of the cycle of popularity may vary, but garden favorites always come back. Take the common zinnia, named the 2000 plant of the year by the National Garden Bureau. It has come and gone in popularity so regularly people have lost track of its true origins.

What are the characteristics of Zinnias?

Zinnia elegans is native to Mexico and is the most popular of the 20 species of zinnias known to science. It is an annual herb in the daisy family growing from 18 inches to more than 3 feet tall. Plants are stout-stemmed, freely branched and bushlike in habit if given enough room.

At least 15 shades of flower colors are described with this species, which is especially rich in shades of purple and orange. Variegated forms have bred true from seed since at least the 1880s. True blues and scarlet reds are lacking. Flower heads are terminal, and in the typical form, contain one or two rows of ray flowers surrounding a central eye of disc florets.

Breeding has changed flower sizes dramatically. Heads range from an inch across to giants 4 to 5 inches across. Doubled forms with as many as 15 stacked rows or ray florets are available causing the blossom to elongate significantly.

Where did Zinnias originate?

The common or elegant zinnia (Z. elegans) was introduced into cultivation by Casimiro Gomez de Ortega (1740-1818), the Spanish botanist responsible for establishing the botanical garden in Madrid. In 1796 he provided seeds to the wife of the English ambassador to Madrid who just happened to be the daughter-in-law of John Stuart Bute, the director of the Royal Botanic Gardens at Kew.

Most common day garden flowers were developed between 1820 and 1860 by gardeners on French, Flemish and English estates. These discoveries quickly made their way into the emerging flower seed industry that was developing as the middle class expanded during the

Industrial Revolution. Double zinnias, the trait that moved them from ho-hum to instant hits, had their debut when M. Grazau in Bagneres, France, found a reproducing double form in a seed lot he had received from the West Indies. Two years later it was introduced to the trade by the Vilmorin firm.

But it was not to last. By 1880, zinnias had been hung with the title of "old-fashioned" and they began to fade from popularity. In my 1888 Burpee Seed Catalog, I find most of the types listed today plus a double-flowered, red and white variegated cultivar that won a "First Class Certificate" from the Royal Horticulture Society in London.

But the decline of zinnias had begun. They continued to lose favor until the "Giant Dahlia" and "Mammoth" strains, produced by California breeder John Bodger, appeared in the early 1920s. Burpee's hybrids during the 1950s saw another revival in interest. Today it is Sakata, a Japanese firm that made hybrids between the old-fashioned zinnia and Z. angustifolia to create the Profusion Series that has revived interest in the old favorites.

Are zinnias easy to care for?

Zinnias are easy to grow from seed and will produce their first flower six weeks after sowing, provided the temperature is warm enough. Plants are offered in pots and packs, but try to plant them before they begin to bloom. If blooms are present, cut the plant back ruthlessly to get them to branch and send up new flower stems. They are best grown in bright locations with a fertile, well-watered soil. Zinnias respond well to cutting, so remove as many cut flowers as possible to keep the plant sending up new flowers.

Leaf diseases, especially alternaria leafspot, are a problem with most clones of Zinnia elegans. To avoid the problem rotate zinnia beds from year to year, buy seed from a reputable source and give the plants plenty of air circulation to keep the foliage dry. The Profusion zinnias are resistant to this disease.