FAYETTEVILLE, Ark. – The late UofA Horticulture Professor Dr. Jon Lindstrom (1959 – 2013) was one of the best plantsmen I’ve ever known, and was always bringing in odd and interesting plants to the gardens we established around the Plant Science building in Fayetteville. One of these, Yellowroot (Xanthorhiza simplicissima), took some patience to warm up to but with time I’ve learned to respect it for its toughness and reliability. 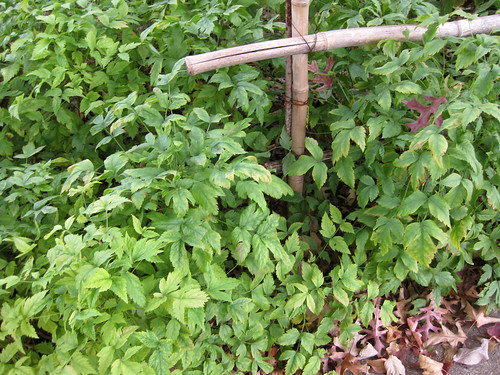 Yellowroot is a native shrub to the southeastern states that makes a tough, long lasting groundcover in difficult sites. (Image courtesy Gerald Klingaman)

Yellowroot is a monotypic member of the buttercup family and one of only two genera in that family with woody stems, the other being clematis. It is a thicket forming deciduous shrub that grows 18 to 24 inches tall with erect, unbranched stems arising from a tight crown and eventually from underground roots as the plant spreads sideways. The gray stems are smooth on the surface, to pencil size in diameter and marked with prominent leaf scars that give them a segmented look.

The leaves are compound, celery-like and clustered at the ends of branches with 3 to 5 two inch long leaflets. The lower pair of leaflets is lobed. New growth in the spring begins with a maroon cast that changes to a bright green during the summer. In the fall a yellowish – orangish – brownish fall color can develop, especially in brighter landscape locations.  Though deciduous, the leaves persist into December.

The star-shaped maroonish colored flowers to a quarter-inch across are produced at the ends of branches in open panicles in early spring before the leaves emerge. Given the gardening kiss of death, the flowers are usually described as not very attractive but interesting.

The inner bark of the stem and the roots (Xanthos = yellow + rhizos = root) produce a yellow dye from a compound called berberine that also has medicinal properties. The yellow dye has the unfortunate tendency of changing to olive drab when exposed to sunlight.  Medicinal properties have been studied but are not in widespread use.

Yellowroot has a common distribution range from Maryland to Florida and west to Mississippi with outlying populations in East Texas and north into New England.  It is extremely winter hardy, tolerating temperatures as low as minus 55 degrees Fahrenheit so prior to the last ice age it probably was found over a wider range. It does not occur wild in Arkansas but grows well as an ornamental throughout the state.

The plant was first discovered by science in 1773 by William Bartram in Buffalo Lick, Georgia, who found it growing along a shaded, moist stream, its preferred natural habitat.

If you like tough, dependable and bulletproof plants, yellowroot is worth considering. However, if lots of bling and glamour is your thing, look elsewhere. It makes an excellent deciduous groundcover and many experienced horticulturists have touted its virtues for more than a century. Though highly regarded by the experts, it has not caught on with average gardeners for two reasons.

First, especially if the soil is well-amended and agreeable, it can aggressively spread beyond the bounds of the intended planting, and secondly, it is not very showy.  Because of its tendency to spread it should be planted where its root run can be confined by a barrier such as a concrete walkway or a metal edge.  Also, dry, poor soil tends to greatly reduce its tendency for rambunctious growth.  The planting on the UofA campus, now more than 10 years old, is staying put because it is under the shade of a large pin oak and competing with lots of other well established plants. Plantings at the Arnold Arboretum in Boston are more than 100 years old and still thriving and provide a strong testimonial to its toughness. In alkaline soils – something the UofA planting shows next to the sidewalk – some yellowing from iron chlorosis may develop.