Plant of the Week: Witchhazel 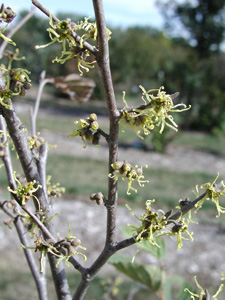 Though there are 12 perfectly good months in the year, we tend to plant our gardens with plants that do their thing during the “growing season,” that eight-month long period when things are lush and growing.

The colder months offer plants with some interesting displays and provide the gardener a good excuse to venture into the garden during the off-season. Of these winter bloomers, the witch hazels are amongst my favorites.  One of these, Hamamelis virginiana, is a tough Arkansas native.

What are the characteristics of witch hazel?

Common witch hazel is a medium-sized, low-branched, shrub-like deciduous tree that grows to 20 feet tall and wide. It belongs to the witch hazel family and is native in the eastern woodlands from east Texas to Canada and is especially abundant in the Appalachian Mountains, where it typically grows along streams and on north-facing slopes.

It has large, 3-to 5-inch, lobed leaves that usually turn yellow in the autumn.  Amongst its fall foliage, the unusual strap shaped fragrant blooms unfold, usually beginning in October and continuing until December. The yellow or maroon-red flowers are individually to .75-inch across but are produced in abundance near the ends of the branches and on short side shoots, so the plant makes a nice display, but one best observed up close, not speeding down the highway.

In much of Arkansas, the February-blooming Ozark witch hazel (H. vernalis) is more common than its fall blooming cousin.

In the spring the unusual half-inch long woody capsules mature that contain the seeds. As these capsules dry, the shiny black seeds are forcibly expelled, shooting them as far as 30 feet. As a graduate student, I first encountered this when I collected capsules and put them in a paper bag on my desk. When the pods dried it sounded like popcorn a popping as the seeds were released.

How did witch hazel get its name?

The name witch hazel is a derivation from old English “wice” or “wiche” which means pliant or bendable. Early English settlers found that the branches of the witch hazel could be used to douse or divine for underground water much as the hazel bush (Corylus) was used back in England. The Latin name was used by Linnaeus and is an adaptation of an ancient Greek name that probably was used to describe the European medlar.

How is witch hazel used medicinally?

An extract of witch hazel bark has a long history of medicinal use, primarily as a mild astringent. The bark and young branches are steamed under pressure and the hydrosol extract collected.  The witch hazel extract is primarily used for topical application for swelling caused by bruising, insect bites, pimples and poison ivy rash. It is also used in most hemorrhoid medicines.

There are five species of witch hazel in the wild, with three native to North America and one each found in Japan and China. The largest flowered species are from Asia, but most of the cultivars offered in the nursery trade are hybrids (H. x intermedia) between the two Asian species. Most of the hybrids bloom in very early spring, and while truly stunning plants, they don’t bloom in the fall and they are not native.  So, if there is room in the garden, this native is worth growing.

What's the best way to use witch hazel in the landscape?

Use witch hazels in places where they can be viewed up close. This species for example would be ideal for planting near a kitchen window where its blooms could be enjoyed from inside.  Also, its brushy nature makes it a favorite for nesting birds. It is hardy from zones 3 through 8.  It is best when planted in a rich, deep soil in an area with light shade or at least protection from the late afternoon heat.  It is slow to establish but once going requires little attention.