Plant of the Week: Willow, Rosemary 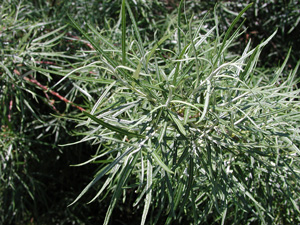 I’ve always liked willows. There is no clear explanation for this attraction, for I know all of the willows’ shortcomings; and believe me, they are many. But there is something appealing about their ease of growth and generally forgiving nature that appeals to me. While most people are familiar with the large weeping willows and the wild willows found along stream banks, let us consider one of the many handsome shrub willows, Salix elaeagnos, known as the rosemary willow.

Rosemary willow is a 15 to 20 foot tall and wide shrubby, much-branched deciduous willow native to the mountainous stream banks of southern Europe and west-central Asia. Of the shrubby willows, most of which hail from mountainous regions or boreal areas of the far north, this is the easiest to grow in southern gardens. New stems are covered in a downy pubescence that becomes reddish-brown during the first year. As the branches get older, they take on an orange-brown color that finally matures as a brown, smooth bark.

The willow’s most appealing feature is its narrow, gray leaves that, as they mature during the course of the growing season, turn to green above with a prominent gray-pubescent undersurface. The plant does in fact resemble rosemary, but with everything enlarged by a factor of five. The leaves are 3 to 4 inches long and usually about a quarter-inch wide. If allowed to grow into tree form – and if the first really hard freeze is delayed in coming – rosemary willow can have a nice, rich yellow fall color. The flowers are the typical catkins of willows and not especially ornamental.

Rosemary willow was introduced into European gardens sometime before 1820 and, while a nice plant, has never been especially common. Most commonly, it is treated as a medium-sized shrub for screening and is cut back severely every year or two. Hard pruning – “coppicing” is the word used when describing the practice for willows – should be done in late winter before signs of new growth appear. If pruned essentially back to the ground every year or two a thick, much-branched shrub will develop that will be in the 4- to-6-foot size range. An unpruned rosemary willow planted 15 years ago is now about 8 feet tall and 15 feet across, so if planted as a shrub, your willingness to do the requisite pruning must be considered. If your follow-through is suspect, choose another species.

If given enough room and if trained as a tree from the start, it makes an excellent small specimen that can become a focal point for the garden. An ideal location for a specimen tree, if such a space existed in the landscape, would be on a hillock beside a sunken patio, where the tree would be allowed to grow over the paved surface.

Like other willows, rosemary willow is typically found along streams in the moist floodplain, but it does not require such a well-watered site. I have grown one on a hilltop for 15 years, and it has never received supplemental irrigation. Willows all have preformed root initials embedded on the stems, so they are amongst the easiest of all shrubs to root – simply stick pencil-sized branches in moist soil sometime in late winter. Plants are hardy from zones 4 through 7.