Plant of the Week: Virginia Creeper 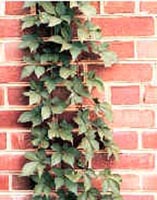 Mistaken identities are as common with plants as they are with people. Just as singer Woody Guthrie described outlaw Pretty Boy Floyd as being accused of every crime in Oklahoma during the Great Depression of the 1930s, people who venture into the woods are quick to blame their rashes on Virginia creeper, an innocent bystander.

Virginia creeper has one of those interesting scientific names that just seem to roll off your tongue -- assuming it's a well lubricated tongue. The genus name is from the Greek word parthenos, which means virgin and refers to Virginia, which was named after England's virgin queen, Elizabeth I. The second part of the name, kissos, is Latin for ivy. The epitaph translates literally as "five leaves."

Poison ivy, with its distinctive three-lobed leaves, either climbs trees as a vine or forms free-standing "bushes" 2-3 feet tall. The bush form is referred to as "poison oak." The stems produce thousands of rootlets that attach the vine to the tree, looking like some irradiated millepede as it climbs skyward.

While poison ivy ranges throughout Canada and the United States all the way to Central America, Virginia creeper is mostly limited in distribution to the eastern states and parts of northern Mexico.

Virginia creeper has holdfasts that are branched with five to seven distinct tips. The tips flatten on the end like suction cups and anchor the vine to the tree or wall. These holdfasts secrete calcium carbonate, the basic component of cement, and literally mortar themselves to their support.

Unlike poison ivy, Virginia creeper will sprawl across the ground and can even be used as a deciduous groundcover.

Virginia creeper is a member of the grape family. It produces clusters of pea-sized blackish-purple berries in late summer and fall. These are relished by birds who spread the seeds with reckless abandon throughout the shrub border and flower beds. While hardly a pernicious weed, new vines have to be pulled regularly or they can get out of control.

Virginia creeper will grown in sun or shade and is pretty much indifferent to soil conditions so long as it's not too wet in the winter.