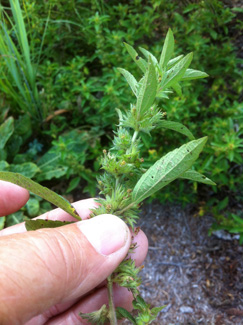 Walking through my garden in the summertime I’m often reminded of the 1971 folk tune A Horse with No Name by the rock band America when I come across a particular weed.

To me it is the weed with no name, or at least none I know.  Then last week I discovered its identity, Three Seeded Mercury (Acalypha rhomboidea), while researching information for its ornamental cousin Copperleaf, Acalypha wilkesiana.

Three seeded mercury is an annual weed growing 12- to 24 inches tall that belongs to the spurge (Euphorbia) family but with clear, not milky sap. It is a warm weather weed that germinates when the soils warm in late spring and really gets growing with the arrival of summertime heat. In its first phase of growth it is unbranched but once it reaches 8 to 10 inches tall it begins branching from the base with plants growing in an open area having a teardrop shaped form. If crowded by others of its kind as it often is, little branching is seen. It has a shallow taproot and scattered horizontal branches but, perhaps its most endearing feature, is it is easy to pull and comes cleanly out of the soil.

Leaves are 1 to 3 inches long and arranged alternately along the stem with a lance shaped form and blunt, serrations along the edge. The petiole may be half as long as the leaf blade.  In the fall the entire plant will often take on a coppery fall color as the leaves die.

As a member of the spurge family, the flowers are complicated. They are produced at the leaf axils up the stem and supported by a flattened, five- to seven-toothed diamond (rhomboid) shaped bract that is about a centimeter long and wide. At the juncture of the bract and the peduncle the true flowers are produced in a structure known as a cyathia that is unique to the family, but they are tiny and require magnification to really see. If pollination occurs and seed set is successful, a 3-segmented capsule emerges with a single tiny seed in each segment on short j-shaped stem.

The reference to mercury in the common name of this plant is to the god, not the metal.  The small bracts surrounding the tiny flowers fancifully resemble the winged feet found on some statues of Mercury.  Mercury was the god of commerce and travel and perhaps the most common symbol of this ancient Roman god we see today is on the logo of FTD (Florists’ Transworld Delivery) affiliated flower shops. The genus name Acalypha was adapted from an ancient Greek word for nettle by Linnaeus because many of the plants in this group have nettle-like leaves.

Three seeded mercury is a common weed in disturbed sites everywhere east of the Rockies.  As weeds go it is not as obnoxious as many because it can be pulled easily without stooping over or spending a lot of time grubbing it out by its roots. As with most such weeds it should be removed early in the summer instead of waiting for the seed to mature as the season progresses. Mulching in late spring does an effective job of preventing seed germination.