Plant of the Week: Sweetshrub 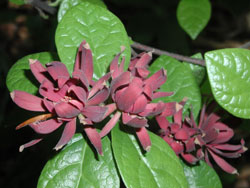 Sweetshrub is a delightfully fragrant native shrub that makes a good addition to the garden.

Most gardens are resplendent with spring flowering shrubs but by and large these are exotics from other parts of the world. One of our native shrubs, Carolina Allspice or Sweetshrub (Calycanthus floridus), would fit right in with the exotic flora of the garden were it only better known.

Sweetshrub is a deciduous shrub growing 6 to 9 feet tall with a wide, somewhat open and upright habit similar to that of a lilac. It has simple, oblong glossy-green leaves 4 to 5 inches long that persist late into November before turning muted shades of yellow before dropping. If crushed the leaves and twigs smell of camphor.

As the leaves are emerging in mid spring, the unusual round, reddish-brown to maroon flowers, appear singly up the stem. The 2-inch diameter flowers consist of 16 to 20 narrow strap shaped petals and sepals (tepals) in a loose, open flower emitting a delightful fragrance reminiscent of strawberries, bananas and pineapple. Because of the fragrance it’s sometimes called a strawberry shrub.

This plant belongs to its own plant family, the strawberry shrub family. The unusual flower and the dry, fig-shaped fruit mark it as unusual. Calycanthus floridus ranges in the wild from Pennsylvania to Florida and Alabama where it is found in woodlands and along streams. A related species is found on the west coast and a third species occurs in China that is sometimes listed as Sinocalycanthus chinensis. The more tinder Chinese species has been hybridized with our native sweetshrub.

Sweetshrub was first noted by Mark Catesby (1682 – 1749), an English naturalist who spent his middle years traveling throughout the New World. In 1722, the Royal Society sponsored him on a plant collecting trip to the southeastern states where he collected Calycanthus “back of Charlestown” in 1726. His book, The Natural History of the Carolinas, Florida and the Bahama Islands, was published from 1731 to 1743. It was the first book published on the flora and fauna of the New World. In it, he included giant folio prints that became the standard for future natural history publications, including the better-known Audubon bird folios.

Sweetshrub is hardy from zones 4 through 9 and will grow in full sun or medium shade. In shady situations, it grows larger and more open, but flowers as well as in full sun. It performs best in a rich, moderately moist but well drained soil with an abundance of organic matter.

Because of its fragrance it’s ideal for planting near entryways or outdoor patios. It flowers on both old and new wood, so it should be pruned after the first round of flowering in late spring.

Several selections are available that have been made for larger flowers or especially good fragrance. 'Athens' has chartreuse-colored flowers and good fragrance. Buying a named clone is recommended because not all seedlings have notable fragrance.