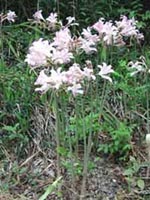 With the arrival of August, gardeners throughout the state are delighted to see their gaudy and somewhat ungainly surprise lilies come into bloom. These bulbous plants belong to the amaryllis family and are native to southern Japan.

The five to seven pink four inch long trumpets are produced atop the pale, three foot tall stems and always remind me of a flock of flamingos standing in a shallow pool at Disney World. The flowers are sterile and do not develop seed pods.

The bulbs are as long as three inches in diameter with long necks and persist for years once established. The foliage comes up in late winter and looks like a large-leafed clump of daffodils, but without flowers. There will be one bloom for about every 10 leaves produced by the clump. The leaves die away with the arrival of the first warm days of late spring, usually disappearing below ground by late May. This growth pattern is an adaptation of the species to survive in an area with moist springs and prolonged periods of summer drought.

Magic Lilies (Lycoris squamigera) first appeared in the American garden trade in about 1880, but they have been cultivated for centuries in Japan. It was originally misidentified and sold under the name Amaryllis halli. The name "halli" probably refers to Dr. George R. Hall of Bristol, RI who spent time in Japan after the Civil War, collecting plants and seeing to the opthomological needs of the Japanese. Hall introduced many Japanese plants into the US, the most noteworthy from an Arkansas’ perspective being Japanese honeysuckle which has escaped cultivation and can be found throughout the state in waste places.

Are magic lilies easy to grow?

Magic lilies are easy to grow, doing well in any average garden soil in full sun or partial shade. They are sold in both the spring and the fall in garden centers. If plants are to be divided from a friend’s garden, dig the plants after the blooms fade in September. They require no fertilization and, as far as I have seen, are bothered by no pests.

What's the best way to incorporate them into the landscape?

Using magic lilies in the landscape is a bit of a challenge because they are so stark when they flower. Probably the best way to use them is mixed in a groundcover bed where their starkness will not be an apparent. The planting should include 10 to 12 bulbs scattered over at least 5 linear feet of bed area. When the plants are in bloom, the length of the planting should be at least twice as long as the plants are high.