Plant of the Week: Strawberry Bush 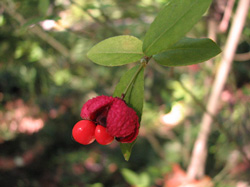 Strawberry bush is an inconspicuous native shrub until it produces its bright red fruit each fall.

In a shaded area on the edge of my garden grows a strawberry bush that goes unnoticed except in the fall when it produces its colorful fruit. But like all garden plants, it has a back story, one that tells of fearsome gods and broken hearts.

Euonymus americanus is a member of the bittersweet family that grows as a 6- to 8-foot tall slender-stemmed, deciduous shrub in shady moist locations in the southeastern states and as far north as southern New York. Its slender stems are four-sided and bear opposite, 2-inch long lance-shaped leaves that turn subtle shades of red in the fall. Plants tend to sucker from the roots and in moist locations can form thickets.

Five-petaled, star-shaped greenish flowers about a quarter-inch across appear scattered about the branches in late spring after the leaves have appeared. Though attractive up close, they’re too small to be effective from a distance.

In September, inflated three- to five-lobed warty, pinkish-red capsules up to three-fourths inch across and dangling on slender peduncles begin popping open to display the pea-sized, bright orange-red berries inside. The common names, strawberry bush and hearts-a-bustin’, come from the showy fruit display, which is quite attractive on heavy-laden bushes.

Strawberry bush is one of 130 species of euonymus, most of which are found in Asia; three are found in the woodlands of eastern North America. Like all plants, this one has several common names, including hearts-a-bustin’ and American spindletree. If you look at the backside of a fruit capsule, it’s easy to see the heart-shaped segments of the capsule and see why it bears that common name.

The spindletree reference is a transference for E. europaeus, a tree-sized version native throughout Europe. The European species was once used as a source for wooden spindles when wool was the primary choice for clothing.

The Latin name Euonymus is an old name used for the plant in Southern Europe and derived from the Greek word Euonyme. In Greek mythology, Euonyme, which means “her whose name is good,” was the mother of avenging deities responsible for suffering in everyday life. This bit of reverse psychology - giving a good name to a god responsible for causing grief - applied to the spindletree because the foliage was deadly if eaten by sheep.

Strawberry bush is a good shrub for naturalizing in out of the way locations in the garden. It will grow in full shade or part sun but afternoon sun should be avoided. It does best in areas with some summertime moisture and is often found in the wild alongside streams. It’s a good companion plant with other shady woodlanders such as spicebush or witch hazel. It reseeds freely in moist locations.

In areas with heavy deer populations, it’s a favorite for deer browse. Like all Euonymus, it’s susceptible to euonymus scale, but the insect doesn’t do as much damage as is found on the evergreen species.