Plant of the Week: Spring Beauty 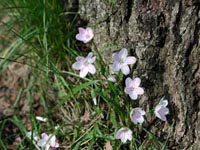 Signs of the approaching spring are everywhere. The crocus are in bloom, the forsythia is budding, a pair of creepers is busily building their nest inside my fence, and I’ve finally gotten around to raking up the remaining oak leaves from the flower beds. Under the leaves, I find the narrow, maroon leaves of Spring Beauty (Claytonia virginica) reaching for the sun.

Our affection for these first spring flowers is out of proportion to their size. Spring beauty is a wee plant, with narrow, strap-shaped, slightly succulent leaves only 5 inches long. The foliage blends inconspicuously with blades of springtime grass.

The leaves and flowering stems arise from a peanut-sized corms that are 2 to 3 inches below the soil surface. The larger corms give rise to several flowering stems. Flowering size corms are produced in two years from seed.

Spring beauty flowers are about the size of a dime with five equal-sized petals that spread wide as the sun warms them. From a distance, the flowers appear white, but on closer inspection you will notice that each petal is suffused with a delicate network of pastel pink veins.

The flowers are produced in an open raceme that reaches 8 to 10 inches long and carries fifteen or so flowers. After flowering, a small capsule forms which contains numerous, tiny black seeds. Spring beauty belongs to the Portulaca family and is a close relative of moss rose of the flower garden and purslane, the rank weed of farmer’s fields.

This diminutive native wildflower is found in sunny places throughout the eastern states, including Arkansas. Lawn fanatics consider it a weed, but gardeners see it as a welcome addition to the early spring flora, even if it has the audacity to grow in the middle of a barren patch of bermudagrass.

The plant is named for John Clayton (1686-1773), an Englishman who immigrated to Virginia in the early 1700's and became part of the elite core of 18th century naturalists. He became interested in plants and sent material back to England before the more famous John Bartram began shipping boxes of American plants abroad. He became such a part of the inner circle that Benjamin Franklin granted him free mail privileges for shipping his plants and letters.

One of his early efforts was to develop a list of native Virginia plants, which he shared with his friends in England. This in turn was shared with John Fredrik Gronovius of Holland, who was a financial backer of Linnaeus. Gronovius, working closely with Linnaeus, classified Clayton’s plant specimens and published them as the two-volume Flora Virginica which appeared in 1739 and 1743. It became the main botanical reference on American plants for at least half a century.

The Flora became the first book of American plants to be published using the new Linnaean system of classification and naming. To commemorate Clayton for his contributions, Linnaeus named the spring beauty in his honor. The Arkansas Native Plant Society has named its publication Claytonia in honor of this early American naturalist.

In the garden, spring beauty is easily lost because it is so small. Like many of the small springtime wildflowers, bunching them together makes for a more effective show. I like to crowd mine next to the trunk of a tree or in a sunny part of the rock garden.