Plant of the Week: Rose Campion 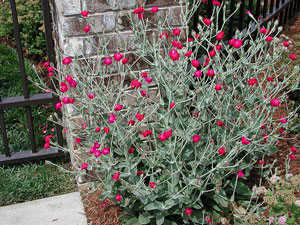 Rose Campion is an old fashioned flower that inserts itself with ease in and around the garden. (Photo courtesy Gerald Klingaman)
Download High Resolution

Something old, something new, something borrowed, something – well – neon pink.  Rose Campion (Lychnis coronaria) is one of those old-fashioned plants that many gardeners kind of know, but it is surprising how seldom it is seen in the garden.

Rose Campion is a short lived perennial of the pinks family that originally came from southwestern Europe but has been so long grown in gardens it is found in most temperate climates around the world. It is clump-forming with wooly, mullen-like leaves that are elliptical in outline and about 5 inches long. When not in flower, the leaves cluster in a tight rosette but as the flower stalks emerge they are arranged opposite each other up the round stem, getting smaller as the stem elongates.

When in flower in late spring and early summer the plants reach 30 inches tall and wide with an open, airy look. The five-petaled flowers are to 1.5 inches across with the petals overlapping to form a saucer like blossom. Colors typically are in shades of hot pink, neon colored rose, white or graduated blends of white to pink. The black seeds are produced in plentitude in a peanut sized capsule if allowed to develop.

Rose Campion has been grown in gardens for at least 2,000 years. Its modern day Latin name is a direct translation from the name used for it by the Greek physician Dioscorides (40 – 90 AD) in his De Materia Medica which served as the go-to source for medicinal advice for 1,500 years and was the basis for most of the herbals that began to appear after 1550 when the printing press made such books possible. According to Dioscorides the name Lychnis is used because the plant leaves were wound together and used as a wick for oil lamps. The epitaph is “coronaria” refers to its use in making garlands. The good doctor advised soaking the seeds in wine and using it to treat the unfortunate soul bitten by a scorpion.

Though Rose Campion is a beautiful plant that has been grown in the Americas since at least 1596, it is rarely seen in the modern garden. Though seeds are offered in catalogs it has been primarily preserved as a pass-along plant amongst grandmothers who appreciate its no-fuss, no-muss staying power. It doesn't work well in nursery containers because it is shy flowering until well established in the ground and most gardeners are reluctant to buy plants without flowers.

Rose Campion grows well in any good garden soil in full sun locations.  Though it will tolerate dry conditions once established it needs moisture during the germination and early establishment period.  It tolerates both acidic and alkaline soils.  Seeds are best sown where the plant is to grow by broadcasting them in early fall.  If started indoors, seeds require light and three weeks of moist chilling to ensure uniform germination.

If Rose Campion plants are cut back before the seeds mature it may be possible to force a second flush of blooms during midsummer. Shearing the plants back after flowering will prevent the plants from reseeding and thus encourage the perennial tendencies of the original plant.   Because Rose Campion plants are iffy, especially in areas with high humidity and heavy clay soils that tend to be wet over winter, many gardeners grow this plant as a winter annual with seeds planted in the fall and then rip it out once seeds have dispersed during the following summer.