Plant of the Week: Scintillation Rhododendron 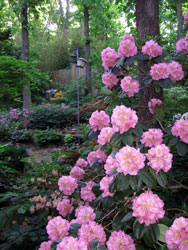 Scintillation Rhododendron is a favorite in my garden during the first week of May each year. (University of Arkansas Division of Agriculture photo by Gerald Klingaman.)

In the spirit of full disclosure, I must admit to being a card-carrying member of the American Rhododendron Society. I like rhodies, but like many gardeners who try to grow them in the South, they can be challenging. My normal refrain is that “they’re just like growing azaleas, only harder.” The plant that first got me interested in this group of ericaceous plants was ‘Scintillation,’ a large, precocious and easy-to-grow pink clone.

Scintillation rhododendron is a large evergreen plant that reaches 8 feet tall and 8 feet wide in 20 years. It is moderately full with 6-inch long, broad evergreen leaves that curl up tight when the winter temperatures drop below 26 degrees. The colder the temperature, the more the leaf curls, making it a kind of visual thermometer during the winter months.

The bloom truss of Scintillation is 6 inches across with 20 or more funnel-shaped clear pink blooms marked with brownish-yellow freckling on the upper part of each blossom. The blooms have a pleasant fragrance when inspected up close. The exact parentage of Scintillation is not known, but the Chinese species Rhododendron fortunei dominates many Dexter hybrids.

That Scintillation grows in my garden and delights me each spring is a good example of a human interest story so common amongst garden plants. Scintillation is a Dexter hybrid, probably the best of about 120 hybrid rhododendrons bred by Charles Dexter (1862- 1943) on his Cape Cod farm near Sandwich, Mass., during the 1920s and 30s.

Dexter was a New England blueblood with ancestors who arrived on the Mayflower. He ran a textile mill, raced yachts and, upon settling down to a restored farmstead to retire, took up Rhododendron breeding when he was in his early 60s. His hobby became all-consuming, and during the next two decades he and a garden staff of four amassed an important collection of Rhododendron species from around the world. His list of contacts included horticultural luminaries such as E. H. Wilson (the famous plant explorer), Charles Sargent of the Arnold Arboretum, Pierre S. du Pont of Longwood Gardens fame and many others.

Dexter’s passion was breeding and sharing Rhododendrons. While he planted out and grew many hybrids on his farm, he also shipped out un-flowered seedlings to garden friends and botanical gardens around the country. Plant breeding can create some beautiful plants, but it also creates a number of “dogs” - plants that should be piled on the burn pile. When Dexter died, he had not officially released a single cultivar to the garden trade. His two decades of work would have been lost but for a dedicated group of friends who undertook the task of tracking down, documenting and evaluating the seedlings that he had sent out during his lifetime, or the ones his wife sold after his death.

The unflowered seedling that was to be officially registered as Scintillation in 1973 was sent by Dexter to the New York Botanical Garden about 1940. In 1949, the Bowers Committee, the group doing the detective work to trace the various seedlings, visited the garden and took cuttings of the plant. Soon after their visit, a flash flood destroyed the original plant, but fortunately the cuttings rooted and the plant was saved. Paul Vossberg named the clone and began selling it at his nursery in 1957. By the 1990s, Scintillation had made it to a Walmart near me where I picked it up and planted it in my shade garden.

Rhododendrons require acidic, well-drained soil. Even on the steep hillside where I garden, I grow my azaleas and rhododendrons in raised beds, with the soil composed of equal parts of sand and fresh pine bark. This mix is blended in with the existing topsoil to produce a bed at least 8 inches high. If the soil is not well amended, rhododendrons will have trouble surviving long term. Once planted, water during dry periods, feed lightly in the spring with a fertilizer for acid loving plants, and stand back and enjoy. Scintillation is hardy from zones 3 through 7. It can be grown in light shade or, probably best, an area with full sun in the morning and shade in the afternoon.