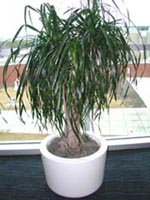 Over the years houseplants have come and gone through my home. My wife prefers the verdant look of lush, green foliage while I fancy the oddities that nature serves up, especially desert plants. On one plant we both agree, the Ponytail Palm (Nolina recurvata).

The ponytail palm, also known as Bottle Palm or Elephant Foot Tree, is a member of the agave family and is native to southeastern Mexico. In its native habitat it grows as a 30 tall tree and looks like an oddly branched palm.

What makes ponytail palm stand out is its distended base which can reach four feet across. The gray, swollen base flares up with the graceful sweep of a piece of modern sculpture. The inflated trunk is for water storage and will see the tree through extended periods of drought.

The leaves of ponytail palm are long, narrow and scratchy to the touch, but without serrate margins. On landscape trees they can be as much as six feet long but on houseplants usually are a third that length. Flowers are produced in large white panicles but only occur on really old plants and then only in tropical climes.

Since it was first described back in the mid 19th century, botanists have had trouble deciding what to call this plant. Here in the US we have mostly used the name Beaucarnea recurvata to describe it while in Europe Nolina recruvata was preferred. So in the current

climate of botanical detente, we are migrating towards the European use of Nolina. The genus name is after C. P. Nolin, a French agricultural writer who coauthored a treatise on farming in 1755.

Ponytail palms are grown from seed which germinates readily with no special treatment.

Given good growing conditions seedlings can produce two foot tall stems with grapefruit size bases in a couple years. Under lower light conditions it’s growth slows, but it will persist for years becoming more impressive with each passing season.

Big pots ultimately produce big plants with big bases. But because of ponytail palm’s aversion to over watering, pot size should be increased gradually.

As a houseplant ponytail palm is a godsend for the disorganized, seeming to thrive on mistreatment that would kill most houseplants. The tip browning seen on leaves can be caused by too dry conditions, too much fertilizer or high a fluoride content in the soil. Trimming off the burned tips tidy’s the plant up.

This is a desert plant adapted to bright light conditions, so it should receive as much light as possible inside the home. But, it has a forgiving soul and will tolerate six months of low light conditions without flinching. If light conditions are poor during the winter months, a vacation outdoors to the patio will insure new growth each season. Fertilizing monthly during these summer vacations will be of benefit.

The usual houseplant pests - scale and mealybugs - can attack ponytail palms but it does not seem to be their first choice when selecting a plant to attack.