Plant of the Week: Poison Ivy Identification & Treatment in Arkansas 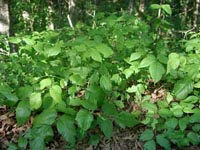 As society becomes increasingly urbanized, a valuable bit of botanical knowledge is being lost and people all over the state are paying the price for this loss of knowledge.

Being able to identify poison ivy is an important bit of information that every person who leaves the black top parking lot should know. Poison ivy is found in every county of Arkansas and in almost all states except for the driest part of the desert Southwest. Being readily spread by birds, it's as common in flower beds and the woods.

How do I identify poison ivy? 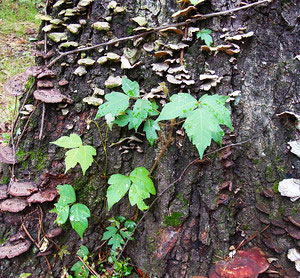 LEAVES OF THREE, LET IT BE — Poison ivy growing on the side of a stump. (U of A System Division of Agriculture photo.)

Poison ivy (Rhusradicans), a member of the Anacardhaceae (Cashew) family, grows as a vine with root-like tendrils that aid in climbing. It has yellow-green leaves that are borne in a compound leaf with three leaflets. The old adage of "leaflets three – let it be" should be taught to all children. Leaflets are usually 3 to 5 inches long and ovate in outline with an entire margin. In the fall, the leaves turn shades of orange or red and may produce open clusters of buckshot size white berries on old vines

It's the only common vine plant with three leaflets other than clematis, but clematis climbs by twisting its petioles around the support and lacks the root-like tendrils. Immature shoots of box-elder maple often have three leaflets on their leaves, but it grows as a tree, not a vine. Poison ivy is equally at home in sun or shade but is more common in fertile soils than poor soils. Poison oak (Rhustoxicarium) is similar to poison ivy except it does not climb but instead forms small bushes 2 to 3 feet tall. The leaves are deeply lobed but still produced with three leaflets.

About half of the population is allergic to the toxins found in poison ivy with light-skinned individuals and young people the most susceptible groups. The non-volatile oil causing the allergic reaction is called urushiol, which is actually composed of four separate toxins. Urushiol is stable and will remain active after being stored as dried plant specimens for over 200 years.

These toxins, apparently an adaptation to prevent foliage feeding by grazing animals and insects, are released when the foliage is brushed and the epidermis broken. Also, contact with the roots or even smoke from logs containing poison ivy vines can cause dermatitis. Because this is a true allergic reaction, a person does not develop symptoms on the first exposure to the plant. However, subsequent exposures result in an allergic reaction due to the activation of our body’s immune response system.

How do I treat a poison ivy reaction?

Symptoms, usually expressed as raised, red, itching rashes, usually appear 24 to 48 hours after exposure. Thorough washing with soap and water, even several hours after exposure, will often prevent symptom development. Several over-the-counter products are available for relieving the itch. Prescription medication is also available which will make short work of the irritating rash.

How do I get rid of poison ivy?

Ridding the garden of this pest is imperative. Several companies sell aerosol products for use as poison ivy killers that are effective if used according to direction. Contact herbicides such as Roundup are not as effective against this pest and repeat sprays may be required.

Grubbing out the roots is probably the most effective means of eradication but is not recommended for people with hyper sensitivity skin. Winter time grubbing is less likely to cause dermatitis as long as long-sleeved clothing is worn and gloves used.