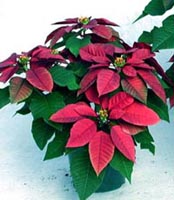 Purple poinsettias? What’s the world coming to! While most poinsettia buyers are traditional and select the standard red issue, consumers have a lot of other color choices to select from. One of the most unusual is a selection called ‘Plum Pudding’ which is adorned with plum-purple bracts.

The poinsettia, Euphorbia pulcherrima, rose from horticultural obscurity a century ago to become the most popular greenhouse pot plant in America with 67 million plants grown last year. While commercially grown in the late 19th century as a Christmas flower, it was really commercialized by the Ecke family in Encinitas, California starting about 1920. Today 75 percent of the poinsettias grown are propagated from Ecke plants.

To the casual observer, a poinsettia is a poinsettia, but in reality there are at least 130 cultivars currently being grown by the four companies competing for the attention of greenhouse growers. A bewildering number of reds are available - I have over 40 in my trials - but they also come in whites, pinks, yellows, purples and a rainbow of bicolor forms.

The red color associated with poinsettias actually comes from modified leaves called bracts that grow on the stem just below the true flowers. Poinsettias are short day plants that require a night longer than 12 hours for the flowering process to be triggered. This magic number is reached in late September with the autumnal equinox, and if all goes well, plants are well-colored eight to nine weeks later.

Developing new poinsettia cultivars is not as straightforward as one would assume. When two poinsettias are hybridized, regardless of the color, the offspring will be red. The color variants are mutants, freaks of nature called chimeras.

It’s estimated that for every million cell divisions, there will be one cell that is incorrectly copied and a mutation will develop. If that mutation is in the growing point of the plant the possibility exists that the genetic change could result in a significant visible change. Being impatient, breeders can’t afford to wait around for natural mutations to occur so they increase the odds by using X-rays, mutagenic chemicals and sometimes even doses of radiation to zap the plants to force change.

The poinsettia bract is composed of layers just like our skin. In red poinsettias, all layers of the bract have red pigments. In white poinsettias, two of the layers are white. Pink poinsettias have a red inner layer overlain with a white outer layer. In Plum Pudding, the epidermal layer is purple with the underlying level red. Because the stability of chimeras is somewhat unpredictable, occasionally bracts will be seen which have bright red patches in a field of purple.

Plum Pudding is the first of the purple poinsettias so its form leaves a bit to be desired. Its growth habit reminds me of an octopus from an old Japanese sci-fi flick with arms reaching out in every direction. Its bracts are not as large as most growers would prefer, but it is a new color break and undoubtedly improved forms will follow.

In a consumer preference study I conducted last year, people either loved or hated Plum Pudding. Overall, it was ranked near the bottom of the 25 cultivars in the study, but the 20 percent or so of the people in the survey who liked it, placed it as their favorite plant.

Caring for poinsettias, regardless of color, is easy. Plants should be purchased with the color fully developed in the bracts because little additional color change will occur in the low-light interior of most homes.

Locate plants where they get good light but are away from cold drafts or dry heat from heater vents or the fireplace. Keep the plant uniformly moist and don’t bother adding fertilizer. Plants allowed to wilt will have yellow leaves that soon fall off. If kept watered and given good light, modern poinsettia cultivars can be used for Easter decoration.