Plant of the Week: Pine, Dragoneye, Korean or Japanese Red 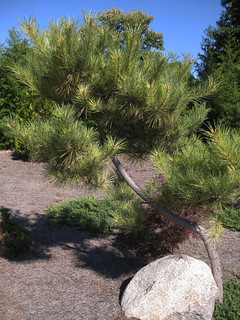 The Dragoneye Pine is a colorful yellow-variegated pine that, though always likely to be smallish for a pine, will eventually get larger than the plant care tag says. (Image courtesy Gerald Klingaman)

The attached plant care tag had an answer, saying it would grow 8 feet high and 4 feet wide, making it the perfect size for what we were wanting in the raised bed beside the Botanical Garden entry door. But is the tag really right?

The Japanese or Korean red pine is native to northeast Asia in northern Japan, Korea and parts of northern mainland China. It is a two-needle pine with 3 to 5 inch long twisted needles that persist for three years. In dense stands in its native range, trees can reach 100 feet tall but when grown in gardens and not crowded by neighboring trees it seldom exceeds 40 feet with a mounded form and a width about one third its height.

With age the trunks take on a peeling, orange red color and are quite attractive. When grown in an uncrowded environment the trunk is seldom straight, instead leaning this way and that in a picturesque form, making it a favorite amongst those selecting plants for use in Japanese gardens.

However dragoneye pine is a selected cultivar, so named because the needles have bands of green and gold down the length of the needle. ‘Oculus draconis’, the most common of several golden variegated Japanese red pine cultivars, has green needle tips and yellow near the base in about a 50:50 ratio. New shoots don’t show the variegation pattern but as the summer progresses the yellow pattern becomes more pronounced.  In the winter the color becomes more muted and is not as colorful.

The plant industry loves plant care tags because -- as Sergeant Joe Friday used to say on the old “Dragnet” TV series -- they “give me the facts, just the facts.”  However, the facts or truth, as we recognize in this election year, are elusive things and subject to interpretation.

While the species has the capability of reaching 100 feet in height, in gardens it seldom achieves half that. Since the plant has been in gardens for only about 150 years and almost always planted as a single, stand-alone specimen, trees could eventually reach greater heights given enough time and the right conditions.

Throw in the fact that the yellow variegation robs half of the needle surface of its chlorophyll, and undoubtedly this cultivar is going to be slower growing than the green leaved species.  How much reduction in overall growth can we expect?

Though it is unstated, most plant care tags give the height of shrubs and dwarf conifers after 10 years in the ground. So, in this case it assumes a 10-year-old dragoneye pine would be around 8 feet tall, or 96 inches. Using this guesstimate, we can estimate that the tree will put on about 9 inches of top growth a year. In 20 years the dragoneye pine, under average conditions, can be expected to be around 15 feet tall.

This rough estimate must also take into account the growing conditions of the planting site.  In our case the plant will be in a raised planter with a finite amount of root-run, further slowing the growth rate and reducing overall size. How much is anybody’s guess, but a 20 to 30 percent reduction wouldn't be surprising. So, by our entryway door I suspect the dragoneye pine will be between 10 to 12 feet tall in 20 years, making it a good fit for the space.  If I’m wrong there is always the fine art of pruning.

Japanese red pines should be planted in full sun in a well-drained soil. hey have considerable drought tolerance once established and are not finicky about soil type. This tree is best used as a standalone specimen or it can be included as an accent in a mixed planting of conifers used for screening. It is hardy from zones 4 through 7.

Red pine is susceptible to pinewood nematode, a problem more likely to be seen in the southern end of its adaptation zone. While not especially common in nurseries, it is readily available in the wholesale nursery trade and most nurseries can special order it.