Plant of the Week: Pepper, Black 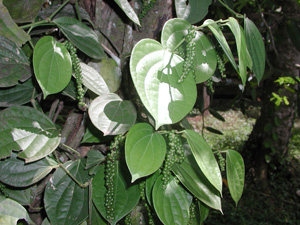 These peppercorns are almost ready for harvest to produce the world's most important spice.

In Springdale, it's easy to tell an authentic Mexican taqueria. On the TV will be either a soccer game or a Spanish-language soap opera, all the handbills and signs will be in Spanish and you'll find only a salt shaker on the table. No pepper. Black pepper, which alone accounts for 20 percent of the world spice trade, never caught on in Spanish-speaking parts of the Americas. Pepper, an indispensible part of all European cuisines, has had a profound effect on the world as we know it today.

Pepper (Piper nigrum) was originally native to regions of the southwest Indian subcontinent. It is one of almost 2,000 pan-tropic species in the genus which comprises its own family. As a spice, it has been consumed in India for at least 4,000 years and has been traded with the West since at least the third century B.C. and China since about 50 B.C.

Pepper is a woody, freely branched tropical vine that scampers over supporting trees to 12 feet tall. It is a part of the moist tropical forest understory, where its freely rooting vines run across the ground, and is covered in 4 inch-long, heart-shaped evergreen leaves. Individual flowers are small and white and are produced on a finger-shaded spike to 6 inches long. Each flower produces a fleshy, single-seeded berry (drupe) of peppercorn size.

Pepper fruits are harvested when the first fruit (the lowest in the cluster) turns red. Black, white and green peppercorns are all derived from these berries. Black pepper is produced by drying the green berries and grinding the dried pulp with the only partially mature seed. The slightly less pungent white pepper is produced by removing the pulp and grinding just the seed. Green peppercorns are pickled fruit that are never allowed to dry.

This world-changing spice showed up in the Mediterranean region when Greece dominated the region with supply lines, probably following coastal regions of the Indian Ocean and then coming up the Persian Gulf to Cairo. Innumerable middlemen were involved in the transfer, with Arab traders dominating the first part of the journey and then rich Italian cartels controlling trading once it reached Europe proper. In 77 A.D., Pliney the Elder commented in his famous Natural History that “there is no year that India does not drain the Roman Empire of 50 million sesterces,” which was the golden coin of the realm.

Romans spread the taste for pepper throughout Europe, but it remained an expensive condiment for only the wealthy. It probably never was used to disguise the taste of spoiled meat because the wealthy could well afford fresh provisions.

The Age of Discovery, with most of its heyday between 1480 and 1650, was fueled by the desire to get rich in the pepper trade by finding a sea route to India. No doubt some of this fervor for finding a sea route to India had religious undertones. Muslims dominated the first part of the pepper trade from India, and Europeans - because of the Crusades - must have found it galling to pay high prices to these non-Christian traders.

Columbus, with his accidental discovery of the New World in 1492, is the most famous of these early explorers, but Portugal's Vasco da Gama became the first to accomplish the feat in 1498 with proof of concept. Ferdinand Magellan, remembered as the first to circumnavigate the globe, did so because he hoped to find a shorter route to India. He departed Portugal in 1521 in five ships with a crew of 270 and learned the hard way about the vastness of the Pacific Ocean. Magellan died in the Philippines in a skirmish with the natives, while most of the rest of the crew died of scurvy. Only 18 of the crew survived the voyage.

By the 17th century, pepper had become a commonplace trade item and the price had fallen precipitously. By 1650, pepper was taken up by all classes. Today, Vietnam is the leading pepper producer, with about 30 percent of the world's production.

Pepper is sometimes grown as an ornamental vine in tropical regions, but most gardeners are more familiar with its relatives, the pepperomias, that are grown as houseplants throughout the world.