Plant of the Week: Peperomia 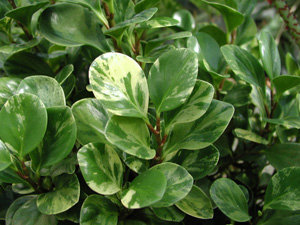 Variegated Peperomia is one of the most common and dependable of this large, easy to grow group of plants. (Photo courtesy Gerald Klingaman)
Download High Resolution

Looking through the list of plants I have covered in these columns over the years, I was surprised to find the peromias had been omitted. The slight was unintended for I find this group of tabletop specimen houseplants both beautiful and interesting. Let us look at a few of the common types.

Peperomias are a large group of more than1,500 succulent plants mostly native to Central and South America, but a few species are described in Africa and tropical Asia. The Latin name recognizes their similarity in appearance to the pepper plant (Piper) to which family they belong.  The vast majority of these plants grow as epiphytes in the tops of trees where they share their lofty perches with orchids, bromeliads and ferns.

Peperomias grown as houseplants are all smallish plants under 12 inches in height with one of three basic growth habits:  bush-like, rosette-like or trailing.  Their flowers are unremarkable but interesting and are composed of a series of tiny blooms congested on a slender, usually cream-colored spike that looks like a rat’s tail. Blooming is usually in the late summer or fall but can occur at any season if conditions are favorable.

The most common of the bush-like plant in the garden trade is Peperomia obtusifolia ‘Variegata’ with its shiny, 2- to 3-inch long rounded leaves marked with irregular blotches and streaks of white. This species is native to south Florida where it grows in hummocky bogs in the Everglades. P. clusiifolia ‘Jely’ has a more elongate leaves and a red margin but is otherwise similar in appearance. P. claviformis has broad green leaves bordered in a red band.  All of these plants grow as multiple stemmed “bushes” that can be kept compact and tidy by occasional pinching. 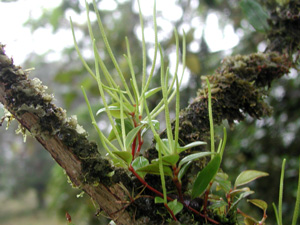 The rosette forming species are probably the most ornamental of the peperomias for they have both a compact form and beautifully ruffled and ridged leaves that come in various colors.   P. caperata, probably a native of Brazil, bears heart shaped leaves on 4 inch long petioles that are produced from short, freely branching stems.  Leaves are steely green or maroon with a corrugated leaf surface. P. griseo-argentea has a similar form but leaves are silvery in appearance. P. argyreia (watermelon Peperomia) has smooth leaves that are marked gray and green like a watermelon.

The trailing types are, in nature, climbing plants that behave somewhat like an ivy plant, so they are well suited for growing in hanging baskets. P. scandens, and especially its white variegated clone, are the most common but other species are available with a similar form.

Peperomias, being adapted to growing amongst the tree tops in little or no soil, have a small root system and can be easily over watered especially during the winter season when growth is slow. Usually they are best grown in relatively small pots and allowed to dry out a bit between watering. They make great houseplants in medium light situations and will hang around for years with minimal care. If pruning or repotting is needed, wait for spring weather to return before cutting them back. Fertilize during the growing season where they plants are happiest if kept outside in a shaded nook during the summer. Propagation is easy by stem or leaf cuttings. 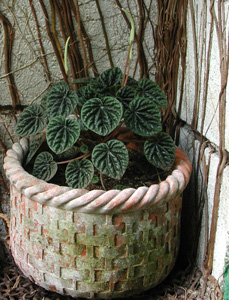 Peperomia caperata is one of the most interesting of the peperomias. (Photo courtesy Gerald Klingaman)
Download High Resolution