Plant of the Week: Peacock Clubmoss 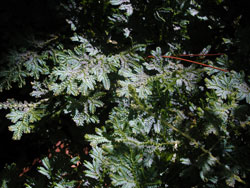 Peacock clubmoss, or rainbow fern, is one of the few plants that breaks the rules, having iridescent blue foliage.

Leaves are supposed to be green. Every kindergartner knows that. But of course, that is not always true, with all manner of variegated and colorful foliage plants now available. Blue foliage is not uncommon in plants, but it is usually a dull blue-gray - as seen in Colorado blue spruce - and caused by a thick layer of wax on the leaf surface. But iridescent blue - as seen in the Peacock Clubmoss (Selaginella uncinata) - is a different matter.

Selaginellas are often listed as fern allies, but in reality they are only distantly related to ferns. Other than the fact that both groups reproduce by spores and favor damp, moist places, they share few other common characteristics. Worldwide, there are about 700 different species now recognized, with all contained in their own unique plant family, the Selaginellaceae. A few species are grown in gardens, including Selaginella uncinata, which is native to China.

Peacock moss is a creeping, freely branching plant that forms a mat 1 to 2 feet across but only an inch high. The stems root freely as the plant grows, and in a good environment the plant will continue to slowly spread outwards. It has tiny, overlapping spear-shaped leaves arranged down the length of the stem creating a feather-like branch about one-fourth of an inch across.

The common names of peacock clubmoss or rainbow moss refer to the iridescent blue color of the new growth. It is an unusual shimmering blue-green unlike any familiar plant. This blue is not caused by a wax deposit on the leaf, but the way the plant defracts light.

The explanation for the color is a physical characteristic of light called thin layer refraction. The same phenomenon is at work when you see a shimmering rainbow on a puddle of water coated with a thin layer of oil. In the case of some Selaginellas, the epidermis of the leaf is coated with two bands of cells in rows that defract light from the plant. Photons of light energy, which travel in waves of differing length depending on the color, are slowed down slightly when they pass through any material. In the case of peacock fern, light rays that bounce back through the rows of cells are slightly slowed in comparison to rays not passing through these bands. Half of the light is shifted so that the peaks of one stream of photons is directly opposite of the valley of another stream of photons, thus creating the iridescent blue effect.

What adaptational advantage does iridescent blue foliage have for the plant? So far no one has been able to answer that, because these plants typically grow in very low light environments receiving less than 1 percent of the available light. My theory, though completely without any evidence, is that the plant reflects some blue light to keep its blue light/red light ratio in balance. Both wavelengths are important in photosynthesis, but most of the red light (the more high-energy portion of the spectrum) is absorbed by the jungle canopy, so there may be an overabundance of blue that doesn’t suit the plant.

Peacock clubmoss makes an interesting pot plant for the cool, shaded greenhouse collection, or it can be grown outside in a shaded, moist site. It is hardy through zone 7, but on the northern end of its range it will freeze back during winter. I plant mine between stepping stones in my patio and walkways. The stones help moderate the temperature and, with every irrigation or shower, the plants get extra water as it runs off the rocks. Propagation is by division.