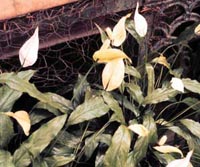 We gardeners have a tendency of wanting it all. Not only do we want houseplants that will grow well in almost any situation, but we want them to flower too. The venerable peace lily fits this description nicely and is also easy to grow.

The peace lily tribe, a member of the philodendron family, consists of about 35 species of rhizomatous herbs from northern South America and Central America. Clevelandii is the most common peace lily in cultivation, with glossy green leaves about 12 inches long and 2 inches wide. The leaves are produced on footlong petioles from the much-branched rhizome. The rhizome is a creeping stem which grows horizontally at the soil surface, not upright like most stems.

Flowers, which can be produced at any season, are white, with a finger-like knobby spath extending from the base of the showy white spadix, which is usually 4 to 6 inches long. The common name is from the universally acknowledged white flag of truce during battles.

I find no mention of when or where the Spathiphyllums were first cultivated, so I suspect they were part of the swarm of "stove plants" the Victorians grew during the middle and later half of the last century. This selection is of hybrid origin and appears to have been produced some time during the second or third decade of this century. In the past five years, German plant breeders have introduced over a dozen new selections of spathiphyllum into the Florida foliage market. Clevelandii, the old workhorse of this group, will probably become less common as these newer, more free-flowering hybrids become better known.

For over 50 years, plant physiologists have been searching for a universal plant hormone that triggers flowering, but so far their search for this "holy grail," which has already been given the name "florigen," has been futile. It seems to be that flowering is controlled by the balance of existing plant hormones, not a single hormone. In spathiphyllum the hormone gibberellic acid (GA) has been shown to cause flowering.

Left to their own devices spathiphyllum will flower but usually only a few blooms are produced at any one time and the timing is erratic. But, by using a GA spray, growers can control flowering precisely with blooms appearing about two months after spraying.

Peace lilies tolerate very low light, down to 20 foot candles, but at such low levels they probably will not flower. To encourage peace lilies to bloom in the home, plants should be located in areas bright enough to read a newspaper. They should be kept away from cold drafts and maintained uniformly moist with fertilizer applied monthly during the spring and summer using one of the liquid houseplant fertilizers.

Never allow these plants to sit in standing water. Repot only when plants begin to crowd their container and are difficult to keep watered. Mealybugs are the only common pest of this tough houseplant, and they are not commonly encountered.