Plant of the Week: Paperbark Maple 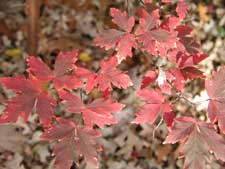 Paperbark maple, a slow growing but distinctive specimen, has been growing in American gardens for 100 years.

This is the American centennial year of one of my favorite trees, the paperbark maple. One hundred years ago this month, my favorite plant explorer, E. H. Wilson, dug two seedling trees from a mountainside in Hubei Province in western China and shipped them to the Arnold Arboretum in Boston. By December of 1907, the two trees were safely planted in the arboretum where they still grow today.

Paperbark maple (Acer griseum) is a smallish, oval-shaped, low-branched deciduous tree growing to 40 feet high with distinctive, cinnamon-colored exfoliating bark. It has trifoliate, olive-green leaves (compound leaves arranged in clusters of three as seen in poison ivy) that turn orange, red or purple in the fall. Fall color production is later than for most other maples. Paperbark maples produce the familiar winged seeds of maples, but unlike other maples, the samara are often arranged in clusters of three.

E. H. "China" Wilson (1876-1930) had previously introduced the paperbark maple to England in 1901 while in the employ of the James Veitch & Sons Nursery, which sponsored so much of the botanical exploration in the middle and late 19th century. During the two and one-half years Wilson was exploring in western China, he collected seeds of over 300 plant species, many new to cultivation.

After his second trip to China for Veitch during 1903 and 1904, Wilson switched allegiance in 1907 and made a collecting trip for the Arnold Arboretum, an arm of Harvard University. While in the employ of the Arnold Arboretum, Wilson made three year-long trips to China. In 1910, his leg was broken during a landslide while collecting regal lily bulbs. Thereafter, he walked with what he called his "lily limp."

For anyone interested in plant history, Wilson is a favorite because he not only traveled to exotic places during a colorful period, but he wrote about his experiences in his many books. He authored 15 books with most intended for a general audience. In 1927, he was named Keeper of the Arnold Arboretum. Tragically, he and his wife were killed in October 1930 in a traffic accident.

The two trees Wilson introduced are quite different in stature. One, the more handsome of the pair, is a tall, erect specimen that has reached 64 feet in height in its 100th year. But unfortunately it’s a male and has never produced a seed. The other tree, a squatty, 30-foot-tall by 38-foot-wide specimen with a broken top, has perfect flowers and has regularly produced seeds.

Seeds of this tree were first distributed in 1927, and most of the older paperbark maples planted in American gardens came from the Arnold tree. Paperbark maples are almost impossible to propagate by cuttings so seeds, which are themselves difficult to germinate and are often infertile, are used to start new plants. So far, there are no clones of the tree, but a few hybrids with related species are sparingly available. I don’t know if the trees I have planted over the years are offspring of the Wilson tree, but I hope so.

Paperbark maples are slow growing, with 30-year-old trees usually under 20 feet tall. This slow growth rate precludes their use as a shade tree, but they’re well suited as small specimens or around entryways or patios. Use them where their striking wintertime appearance can be displayed. They produce fall color at an early age, and the bark begins to exfoliate on trees less than 10 years old.

Though slow growing, paperbark maples are tough, easy-to-grow trees not bothered by serious insect or disease problems. They are best in full sun or light shade in a fertile, well-drained soil. The species is hardy from zones 5 to 7.