Plant of the Week: Papaya 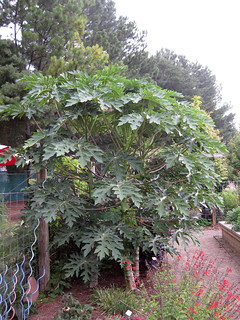 The papayas in the vegetable garden have grown really fast and, though they might not ripen before frost, have a number of fruit as long as my hand clinging to the stout trunk.

I will freely admit I don’t know much about tropical fruit, but this tropical tree has made remarkable growth in the five months since the seedlings were set out. Though they will never tolerate a frost here in our mountain home, it has been interesting watching them grow through the summer where they have made handsome ornamentals.

Papaya is a tropical tree native to the lowlands of Central and South America. It belongs to a small plant family of six genera and about 30 species, but papaya is the only species in the genus Carica. Papaya grows as a single stemmed, stout trunked tree 10 to 15 feet in height.  Plants tend to be short-lived, seldom persisting more than five years but they grow and flower quickly from seed.

From this stout trunk arise large palmate, seven-lobed leaves to 2 feet across on stout petioles that are from 2 to 3 feet long. The leaves are technically evergreen but the tree drops lower leaves as the plant grows so that the nutrients can be recycled for new growth.

Papaya plants may be male, female or hermaphrodites with the last-named being the preferred sexual orientation for crop production. We lucked out with our seed grown crop and seem to have perfect flowers (hermaphrodites) because the large, creamy five-petaled blooms were followed by fruit. Flowering is independent of season and continues year-round provided it is warm and moist enough for growth.

The ripe fruit on most commercial clones are about 8 inches long, football shaped and weigh about a pound. The fruit ripen to yellow-orange with the flesh either yellow or orange-red in color.  Unfortunately our fruit did not appear until September so it is unlikely frost will hold off long enough for the crop to ripen. Such is the fate of growing a tropical crop in a temperate climate.

Papayas are one of the top five commercial tropical fruit crops with commercial production occurring worldwide. Hawaii (the big island) is where most domestic papaya production occurs but the plant can be grown in frost-free areas of Florida, Texas and California. 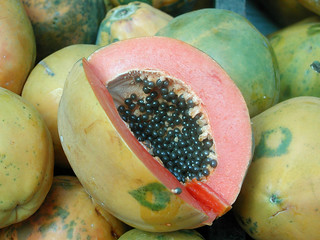 Interestingly, the Hawaiian production was almost wiped out by a lethal virus disease, papaya ringspot virus. This deadly virus disease not only renders the fruit unmarketable, it drastically reduces yields and quickly kills the plants. Beginning in the mid 1980s when genetic engineering was very much an academic exercise, researchers at the University of Hawaii explored ways of using this new technology to save the state’s papaya crop.

Using portions of the coat protein of the virus, the scientists used “biolistic transformation” – essentially a shotgun approach of blasting bits of gold dust coated with part of the virus coat protein into undifferentiated callus cultures of papaya.  Some of the plants grown from these tissue cultures were able to recognize the ringspot virus when it invaded the new plants and ward off the attack. Though plants don’t quite have immune systems, the principle works much as in humans when we dutifully line up for our flu shots each fall.

The cultivar ‘SunUp’ was released from the program and displayed essentially complete resistance to the Hawaiian Island strains of the disease but it lacked the commercial qualities growers were seeking. ‘Rainbow’, an F-1 hybrid using ‘SunUp’ for disease resistance, was released a few years later and is now grown by most Hawaiian exporters. The transgenic fruits were approved for sale in the US market in the late 1990s and in 2011 Japan finally accepted the GMO fruit as safe.

Papaya seeds have no dormancy and can be germinated in any good potting mix that is kept moist and warm. Seeds should be planted about 10 weeks before the transplants are to be moved out of doors. Because this is a tropical crop, plant it out with warm weather plants like lantana, not cool season plants such as snapdragons. Give plants full sun and a rich, well-watered site to achieve best growth. Seedlings we planted in a highly fertile mushroom-compost-amended soil grew twice as large as plants given little in the way of supplemental fertilization. Papaya seedlings can be grown in containers and moved inside when winter arrives, but for them to successfully mature a crop of fruit and large and heavy pot will be needed.