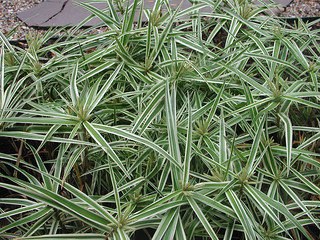 Sparkler Sedge, Palm Sedge -- Sparkler sedge is a white variegated clone with 8-inch long leaves that are a half-inch wide. Leaf margins have a broad white edge with one to four narrow linear stripes of white running the length of the blade.(Image courtesy Gerald Klingaman)

FAYETTEVILLE, Ark. -- Too often gardeners get hung up on flowers and focus all their attention on plants that bloom. Foliage color and texture are equally important in garden making and oftentimes lead to more interesting and easier to maintain displays. Sparkler Palm Sedge (Carex phyllocephala ‘Sparkler’) is one such plant that more gardeners should know.

Sedges, which belong to the cypress family, are grass-like plants that have confounded botanists for centuries. About 2,100 species of Carex have been described from throughout the world with an unusual inverse distribution pattern where they are relatively uncommon in tropical lowlands and more common in colder temperate climates. Most species are associated with moist, sometimes boggy sites.

The palm sedge is native to southeastern China and Japan. Plants are clump-forming with short rhizomes and stout, triangular stems growing 1 to 2 feet tall and topped with linear leaves in a whorl. In mild climates the stems get longer each season with the older, basal leaves dropping off after two years, leaving the newer leaves at the ends of the stems to create a palm-like look.  The plant is considered hardy from zones 7 through 10 but in the colder end of the range the stems may freeze back canceling the palm-like characteristics.

Sparkler sedge is a white variegated clone with 8-inch long leaves that are a half-inch wide. Leaf margins have a broad white edge with one to four narrow linear stripes of white running the length of the blade. The sedge flowers appear during mid to late summer and get caricologists, those who study sedges, excited but leave the average gardener unmoved.

Sparkler sedge was collected and named by plantsman Barry Yinger in the 1970s on one of his plant collecting trips to Japan. Yinger was collecting for the newly opened Wheaton Botanical Garden in suburban Washington D.C. Like most of the colorful, interesting and important garden plants he brought back during his travels he picked the variegated sedge up at a nursery where it had been grown for years.

While the glamour and thrill of plant hunting in remote, untraveled places is intriguing, a much more productive approach in a culture with long history of gardening is to visit nurseries and choose plants that have already been domesticated. Yinger developed the contacts to explore a little known aspect of Japanese gardening called koten enger. It translates as “cultivation of classical plants” and has no real counterpart in western gardening. Practitioners of this art form cultivate relatively common plants but seek out variant forms that make their plants unique and subtly different from those of other collectors. The variegated hostas that were imported from Japan in the early 19th century were likely from specialist collectors of that era.

Sparkler sedge does best in organic soils that are maintained moderately moist during the growing season. It should have bright conditions but not full sun. This summer I divided the nine nice-sized plants I had into three different sites: a moist, organic soil close to the sprinkler head, a saturated zone near the edge of a running stream and an irrigated but relatively dry site with organic soil. The plants in the saturated zone suffered badly; the plants in the dry site survived but didn’t show much promise. Only the plants in the well-watered bed showed the potential of the clone.