Plant of the Week: Pachysandra 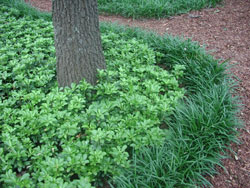 Pachysandra is perhaps the best groundcover for deep shade.

Evergreen groundcovers are an important part of the wintertime landscape because they provide patches of color to offset the more muted tones of the rest of the garden. Pachysandra, though often overused in the northern states, is one of the best of these groundcovers for providing winter color and cover in low light situations.

Pachysandra terminalis is a creeping, semi-woody evergreen of the boxwood family that grows 8 to 10 inches tall with all of its leaves arranged in a whorl at the ends of the erect stems. Leathery leaves are 2- to 4-inches long and spoon-shaped with a tapered base and terminal serrations. The upper surface is a deep, lustrous evergreen while the undersurface is greenish-white. It spreads horizontally by means of shallow white rhizomes.

Pachysandra flowers are more interesting than beautiful. They are white, coarsely bottlebrush-shaped affairs about 2 inches long that are produced from buds near the ends of branches in mid-spring. The bulk of the flower is composed of thick, protruding male stamens with several white, two-lobed female flowers scattered at the base of the inflorescence. The name Pachysandra translates from Latin as "thick stamen." Because this species is self-incompatible, fruit are seldom produced as most plantings are of a single clone.

The genus Pachysandra was established by Andre Michaux, a French botanist who collected in the northeastern states in the late 18th century. His find was Pachysandra procumbens, our native American species known as the Allegheny spurge. The Japanese pachysandra (also native in parts of south-central China) was not collected until the 1880s. Interestingly, at least according to two authors who have written books on the use of plants in Japanese and Chinese gardens, Pachysandra is not common in gardens of the East. The plant is not even listed in either reference.

In the northeastern states, Japanese spurge-so called because this plant was at one time considered to belong to the euphorbia (spurge) family-has been widely used to the point where many speak of it with disfavor. But it is a tough, easily grown, widely adapted non-climbing evergreen groundcover that does its job without fuss. It is best in shade or partial sun in an acidic soil with high organic matter content. It has reasonable drought tolerance but should be watered during severe drought periods. It grows between zones 4 and 9. For groundcover purposes, plant it in an 8- to 10-inch spacing grid.

Four forms are commonly offered. 'Green Carpet' is an improved selection of the species with a slightly more compact habit of growth, somewhat smaller leaves and a more lustrous leaf surface. 'Green Sheen' is a somewhat less vigorous, slightly smaller form with leaves that look like they have been sprayed with leaf polish. 'Variegata' is a low-vigor, white-margined selection best used as a specimen plant instead of as a solid patch of groundcover. If unnamed, the Pachysandra you may be planting is probably the normal clone that has been circulating for over a century among nurserymen and gardeners. Propagation is easy by division or summertime cuttings.