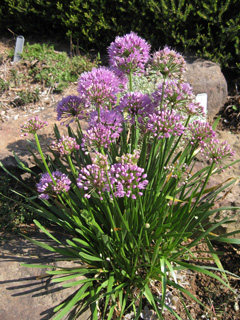 While I try to live a life centered on moderation, I admire people who are passionate and obsessed about things that interest them. One such individual is Mark McDonough, a gardener who has a passion for ornamental onion. One of his onions, Allium ‘Millenium’, is now in bloom in the rock garden and shows the results a long and unwavering commitment can have on the garden world.

Alliums consist of about 850 species of Northern Hemisphere plants currently classified as belonging to the amaryllis family. The center of distribution is the Mediterranean region and the Middle East but they are widely distributed with more than 120 species found in North America.

Millenium ornamental onion is one of the rhizomatous alliums in the section Rhizirideum, a group of plants that still produce bulbs, but they are smaller and borne on a horizontally spreading rhizome. Bulbous onions, such as the sweet onions we eat and the giant ornamental onion (Allium giganteum) have large individual bulbs and the foliage dies down after flowering.  The rhizomatous onions, with chives (Allium schoenoprasum)being a good example, are clump forming with flowering usually later in the year and with foliage that persists through the summer.

In three or four years, expect Millenium to form a clump about a foot across with flowering stems about a foot tall. The leaves are flat, a half-inch wide and 8 inches long, bright green and persistent throughout the summer and slightly garlic scented when crushed.

The pinkish-lavender flowers are individually about three-eighths of an inch across with six tepals (petals) but are borne in a dense umbel that forms a head about three inches across.

The stems are stout with the umbel held upright on the end of the scape. Because this hybrid, possibly between Allium nutans (Siberian chive) and Allium senescens (German chives), set no viable seeds, the clump usually remains in bloom for a month or more during midsummer.

Millenium is the misspelling originally used by McDonough for this 2000 introduction. As a self-taught expert on all aspects of alliums, McDonough sticks with the original spelling because the inscrutable rules of taxonomy place great emphasis on consistency even though modern word processing programs insist on correcting the flub.

Mark McDonough, an architect by training, gardens in Pepperell, Massachusetts.  He noticed his first flowering onion as a teenager and has been collecting and growing them for over 35 years.  He does not have a nursery but releases plants, so far unencumbered by patents, trademarks and other such covenants that seek to control propagation, to plantsmen who will get his hybrids into the trade.

Millenium ornamental onion is an easy to grow plant that can be used in the rock garden, mixed in the perennial border or added to the foreground in foundation plantings. Plants are deer proof and attract lots of bees and butterflies to the summertime garden. It should have at least 6 hours of sun a day and reasonably well-drained soil but does not seem finicky about soils.  Plants are hardy from zones 5 through 8. Division can be made anytime from late winter until early summer.