Plant of the Week: Oleander 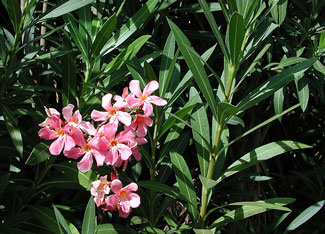 Oleander is available in a wide array of colors but pinks and reds are most often seen. (Image courtesy Gerald Klingaman)

The purpose of these weekly articles, now in their 17th year, is to report on plants that are grown in Arkansas gardens and the surrounding areas of the mid-South. The normal minimum temperatures of the state range from a frosty minus 10 degrees Fahrenheit (USDA zone 6) in Benton County to a more tepid 10 degrees (zone 8) for the southern tier of counties. Oleander (Nerium oleander), though not especially common in south Arkansas, is sometimes grown and deserves a closer look.

Oleander is an evergreen shrub growing to 12 feet tall that belongs to the periwinkle family and has been grown so long in cultivation no one knows for sure its origins. It probably originated in southern Asia but due to human intervention has naturalized from the Mediterranean region to Japan. Though most often grown as a rounded shrub it will become a small tree reaching 20 feet in height in frost-free areas.

Its leathery, deep green leaves are usually in a whorl of three on the branch, willow-shaped with an entire margin and 3 to 5 inches long. The sap is clear, viscous and capable of causing dermatitis. Eyes are especially sensitive to contact by the sap.

Showy flowers in shades of pink, rose, red, yellow, salmon, orange and combinations of these are to 1.5 inches wide and borne in terminal clusters from new growth in the summer and early fall. Flowers may be single or double, fragrant or not. More than 400 cultivars have been named and about 60 are common in cultivation. 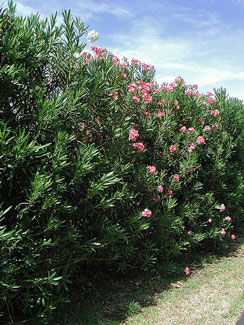 Oleander is a large evergreen shrub that is hardy in the southern tier of Arkansas counties. (Image courtesy Gerald Klingaman)

Oleander has a reputation for being toxic and several urban legends have sprung up about it.
The most common is the troop of boy scouts who was supposedly poisoned by eating hot dogs roasted using branches cut from oleander branches. This incident never happened but does closely resemble a similar report in various gardening books from the 19th century reporting on French soldiers near Madrid during the Peninsular War of 1809 who succumbed after eating meat roasted over a campfire using spits made from oleander.

I’ve also read of a Roman soldier version of this story. The truth of the Spanish incident where 7 of 12 supposedly succumbed is beyond my knowing but embellishment of a good tale by writers of all ilk – especially when it relates to some human drama – is a time-honored tradition in journalism.

All parts of oleander are toxic and this plant is often considered the most toxic of the many potentially poisonous plants we grow in our gardens. In a 20-year period from 1985 to 2005, five incidences of oleander related deaths were reported in the United States - with three of these by intentional ingestion, probably with a goal of suicide. Quoting Lankford and Boor in their May 1996 article in “Toxicology”: “The human mortality associated with oleander ingestion is generally very low, even in cases of intentional consumption (suicide attempts).”

The remaining two cases of death fall outside of the norm, a pair of adopted 2- and 3-year Russian boys named Alexei and Peter Wiltsey from California. They were found dead in their bedroom on May 4, 2000, after several days of eating oleander leaves from a neighbors bush. According to the toxicologist who oversaw the case, he knew of no other reported cases of children eating enough oleander foliage to cause death. The corners office speculated that the children, perhaps still suffering from malnutrition from their adoption a year earlier from a Siberian orphanage, may have suffered from a condition known as “pica” where malnourished children eat anything, including soil and plants.

Domesticated animals, especially horses, are more likely affected by oleander poisoning, especially if prunings are discarded where they can be consumed.

Oleander is a tough, easy to grow plant that is best in sunny, well drained sites. Foliage damage usually occurs when winter temperatures fall below 15 degrees F with dieback occurring below 10 degrees F. It can be used for screening, in foundation plantings and as a tall groundcover planting in sloping areas where little attention will be given. Plants are extremely drought tolerant. They have long been favorite patio plants in colder regions where they are grown in large tubs. They can be overwintered indoors in unheated garages where the wintertime temperature does not fall below 15 degrees F, or even in basements where the light level is low and plants wait out the winter in miserable growing conditions.

The potential toxicity of oleander is not in question, but because so many of the plants we grow in our gardens are theoretically poisonous, the risk should not be over exaggerated. Attention should be paid to toddlers to protect them from all sorts of dangers, and from the earliest age, children should be taught to not eat anything in the garden that a parent doesn’t specifically say is safe.