Plant of the Week: Obedient Plant 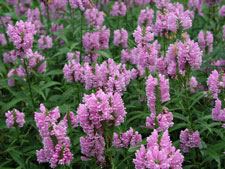 Obedient plant is one of our native wildflowers that has found its way into gardens.

While it's true all garden flowers once grew wild and free, it doesn't mean that all wildflowers make good garden plants. The number of garden flowers arising from American natives is a woefully short list, but the number does appear to be on the increase.

Some plants, such as the late summer blooming obedience plant (Physostegia virginiana), are widely distributed wildflowers seen in gardens, but in refined settings it can prove itself to be an undignified country cousin.

Physostegia virginiana is a member of the mint family found over a wide part of the eastern United States east of the Great Plains. It's an herbaceous perennial that spreads by underground rhizomes and is capable of forming large colonies. It typically grows in open woodlands, in moist prairies or along roadways.

How big do obedient plants get?

In late summer, pink, pinkish-purple or sometimes white, inch-long inflated flowers appear in a terminal spike. At first flowering, the spike is unbranched, with the lowest blossoms on the inflorescence opening first. As the spike elongates side branches form from the base of the inflorescence and more blooms are produced. Plants are usually in bloom from mid-August until early October.

Where does obedient plant get its name?

This species goes under two common names with obedient plant being the most commonly used by gardeners. According to the oft-repeated rehash of information, this name comes from the ability of individual blossoms to remain in place if repositioned/moved on the inflorescence (stem).

I've tried to make my obedient plant mind, but it lacks discipline; the flowers spring back about as quickly as any other plant. Professor Bailey in 1904 calls it false dragonhead, a reference to a mistake Linnaeus made 150 years earlier when he combined it with the dragonheads (Dracocephalums) of Europe and Asia.

Several clones of obedient plant are offered including 'Alba' and 'Summer Snow' (white forms), 'Bouquet Rose' (a darker-flowered form), 'Variegata' (pink flowers, white marginal variegation) and 'Vivid' (an 18-inch tall pink form). However, all of these selections appear to have the main flaw of the species; a thuggish nature prone to take over less aggressive neighbors.

A dozen species of Physostegia are described in the eastern United States. One only wonders what kind of garden plants could be created if some detail-oriented gardener were to send these natives off to finishing school. By crossbreeding, perhaps amongst these species or the closely related Dracocephalums, it should be possible to produce a bit more refined plant with better garden characteristics.

Obedient plant is best used in full sun or part shade in prairie gardens and naturalized areas. If used in the perennial border it should be located at the back of the border or in areas where it can be contained by some type of edging. Lifting, dividing and resetting the clump every couple years will also help keep it in bounds.