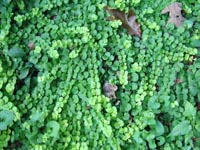 The round, penny-sized leaves on the trailing stems account for the common names of moneywort or creeping Jenny for this plant.

In the last few days, I have gotten around to converting the trail in my shade garden from grass to a perennial groundcover. The groundcover I chose for most of the path was creeping Jenny, Lysimachia nummularia. I had finally given up on grass because the site was just too shady, so I needed a groundcover that would tolerate both the shade and moderate foot traffic.

What is creeping Jenny?

Creeping Jenny is a fast growing, prostrate plant with pairs or round, penny-sized leaves along the slender stems that snake out from the center of the plant. It’s mostly evergreen in our area, especially if situated where it doesn’t get much direct wintertime sun. The stems root freely at the nodes.

Plants grow about 2 inches tall but will spread as wide as space permits. My shade garden path is lined with azaleas, so light will probably be too low for it to spread much beyond the path. In another portion of my garden I have used it to edge a border. There it creeps out into the lawn, but if I had to choose one, it would probably be the creeping Jenny.

Are there different cultivars?

The most common form of creeping Jenny in the nurseries is the golden-leafed cultivar ‘Aurea’ which has bright, chartreuse leaves in the spring that take on a somewhat more subdued tone as they age. The green form is available, but less common. For my pathway, I planted two-thirds green plants and interspersed a third golden plants. They will have to work it out amongst themselves to see which dominates.

Creeping Jenny belongs to the primrose family. It has yellow, upturned, five-lobed flowers in late spring. The flowers are a nice bonus, but the leaves are its main appeal.

Where did the name originate?

This is an old European garden plant with many common names. Linnaeus assigned the epitaph "nummularia", which translates from Latin as "resembling a coin," a reference to the round leaves. In England it was known as "Twopence" but, moneywort seemed a better choice on this side of the Atlantic.

But the most often used common name seems to be creeping Jenny. Who was Jenny? Though this involves some speculation on my part, the following explanation seems plausible, given the way language changes through common usage.

It turns out that this little herb was first grown as an herbal remedy. According to the Gerrard’s herbal of the early 17th century; "The herbe boiled in wine with a little honie, or meade, prevaileth much against the cough in children, called chinne cough." The "chinne cough" to which he refers is what we know as whooping cough. It wouldn’t be much of a stretch to imagine "creeping chenny" changing to "creeping Jenny" as the old word for the disease fell into disuse.

How do I care for creeping Jenny?

Creeping Jenny is easy to grow, responding to extra watering or fertilization by just growing faster. In rich garden soils, it provides a cascade of stems and leaves that shoot out in all directions with the stems capable of making a foot or more of growth in a month.

In poorer soils, it spreads more slowly but still provides reasonably rapid cover. Once the groundcover trail is established, a couple mowings during the summer should keep it neat and tidy.